On RT Network’s “The Big Picture,” Project 21’s Hughey Newsome told host Thom Hartmann that the reason Hartmann knew of no conservative alternatives to ObamaCare isn’t because there aren’t any — it’s because the mainstream media refuses to talk about them. 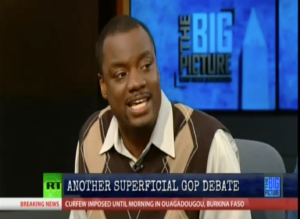 “I think that Republicans are focused on stopping ObamaCare at this point before it gets too entrenched into the American economic system, into the health care system, and then you fix it,” Newsome said.

“In other words, you don’t have a plan either,” interrupted Hartmann.

“The Republicans have been proposing potential solutions and ObamaCare alternatives since ‘09,” countered Newsome.

“I have not heard one serious proposal,” said Hartmann.

“Let’s not say Republicans haven’t proposed alternatives. Making insurance portable,” for example, said Newsome. “There are alternative approaches and solutions that are being explored. They just haven’t seen the light of day because the mainstream media is not allowing it.”

Too bad Newsome didn’t have this handy resource in front of him to stick in Hartmann’s face. Last year the National Center created this document, which details some of the conservative and libertarian health care reform proposals about which Hartmann and many Americans sadly haven’t heard.

The health care debate between Newsome and Hartmann on 1/15/16 can be viewed below: