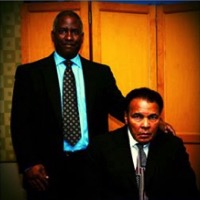 I woke this morning to news of the passing of Muhammad Ali. My heart was instantly saddened but then fond memories of my interactions with The Greatest began to flood my thoughts.

As a child, I had the pleasure of being an overnight guest of the Champ at one of his homes. I was traveling with my father, James Meredith, to where and why I have no recollection but I distinctly recall the pronouncement that the home we were pulling up to was Muhammad Ali’s and that I better not “show out” while I was there.

It was a profound experience. I have remembered it all these years and was honored when some 30-35 years later I had the pleasure of running into him at an event in Washington, DC. My wife and I had gone through the reception line and were chatting with other guests when Mr. Ali’s assistant came over to us and said to me, “the Champ would like to see you.”

I followed the staffer into the cordoned section were Ali was sitting and sat next to him. Through the conversation it was apparent he knew who I was and when I shared my story of our stay at his house so many decades prior, he smiled, then shared one of his stories of him and my father.

Millions around the world will mourn the loss of this human being, Tina and I among them. But we will also reminisce fondly of our encounters with him and how wonderful those experiences were. RIP Muhammad.