On August 7, Chad Copley shot and killed 20-year-old Kouren Bernard Thomas outside his home, after a 911 caller (presumably Copley) claimed he was “securing (his) neighborhood” as part of a neighborhood watch program. 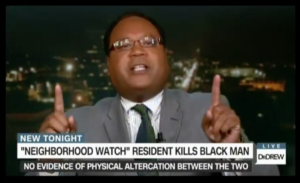 Cooper said Copley “has a misunderstanding about the law. The law will allow you to warn people that you’re carrying a firearm, but you’re actually not allowed, in almost every jurisdiction in the country, to discharge your firearm, even into the ground, unless you’re in a special area where discharges are allowed. So it’s really troubling from that perspective that he was under this impression.”

Later in the program, Cooper caused a firestorm when he challenged the interpretations of his co-panelists about whether race played a part in this murder, and then added these comments:

“Here’s the truth: The CDC lists homicide as the second leading cause of death for black men… There’s no other ethnic group for which homicide is even in the top 10.”

“Second data point: Most people, when they are murdered, are killed by someone of their own race. When the races are different, it turns out there are more blacks who have killed whites than the other way around.”