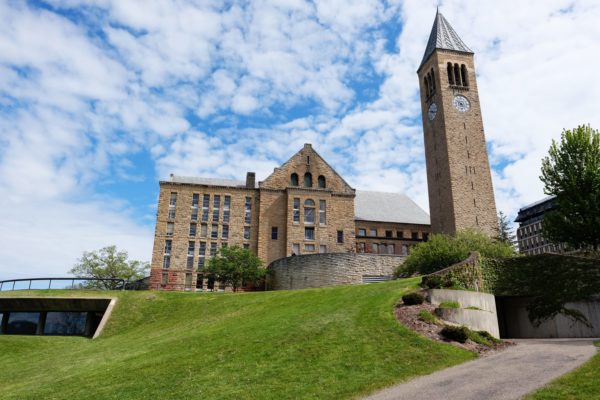 ConservativeBlog.org
Posted at 13:27h in Blog, Project 21 by David Almasi

Black students at Cornell University are complaining that they are at a disadvantage because there are too many black students.

Project 21 member Darryn “Dutch” Martin, a former foreign diplomatic staffer and motivational speaker, remembers seeing this happen when he was an undergraduate.  But he never saw such blatant activism as this – calling for administrators to participate in what constitutes intra-racial prejudice.

Among the demands Cornell’s Black Students United recently made to university president Martha E. Pollack in response to an alleged racial incident on campus was to “increase the presence of underrepresented Black students on this campus.”  There is no direct complaint about the current number of black students at Cornell.  They do want more attention paid to an “underrepresented” group.  The BSU wants Cornell to recruit black Americans whose families have been here for over two generations:

The Black student population at Cornell disproportionately represents international or first-generation African or Caribbean students.  While these students have a right to flourish at Cornell, there is a lack of investment in Black students whose families were affected directly by the African Holocaust in America.  Cornell must work to actively support students whose families have been impacted for generations by white supremacy and American fascism.

This rift between native-born blacks and those coming here from abroad to study is nothing new.  Dutch saw it.  He doesn’t see the motivation of the Cornell BSU’s demand as anti-immigrant or nativist.  Instead, he considers it something of a cover-up.  Dutch has noticed two different approaches to learning and the college experience, and he thinks the BSU is looking for more people to side with them their more relaxed attitude toward learning:

I have a question for the “black and proud” crowd that loves to romanticize Africa.  I’m talking about those who harken back to “Mother Africa” and seem to enjoy throwing complaints about the legacy of slavery in every white person’s face – implying that they long to escape the African diaspora.

That being the case, there is ample opportunity to fix the problem.  The solution lies within.  Dumping on fellow black students, however, will get them nowhere fast.

My simple question to them is: what’s up with this?  Why are you working against your African brothers?

When I was in college, I remember seeing this unfortunate dynamic.  The African and Caribbean students I studied with usually had a distinct advantage over the native-born black American students.  What gave them this privilege?  It was evident.  The foreign-born students didn’t have a self-defeating victim mentality.  And they were very serious students.

Instead of wasting time complaining to the university administration about what they perceived to be a system that wasn’t doing anything for them, the African and Afro-Caribbean students – just like the Asian students – spent their time hitting the books.  They were studying on Saturday nights while the black American students were out partying.  As a result, the foreign and students new to America excelled academically.  Surprise!

This is also why I got along so much better with the African and Afro-Caribbean students. My studious habits sometimes had me at odds with my black American peers.

Now, black American students – at an Ivy League school, no less – are showing their hand.  They’re exposing themselves as weak and intellectually lazy.  They claim victimhood, but they are being shown up by their fellow minorities.  African, Afro-Caribbean and Asian college students take their educational experiences far more seriously than black American students, and American blacks are unfortunately lagging.  It’s not institutional racism – it’s a problem of their own making.