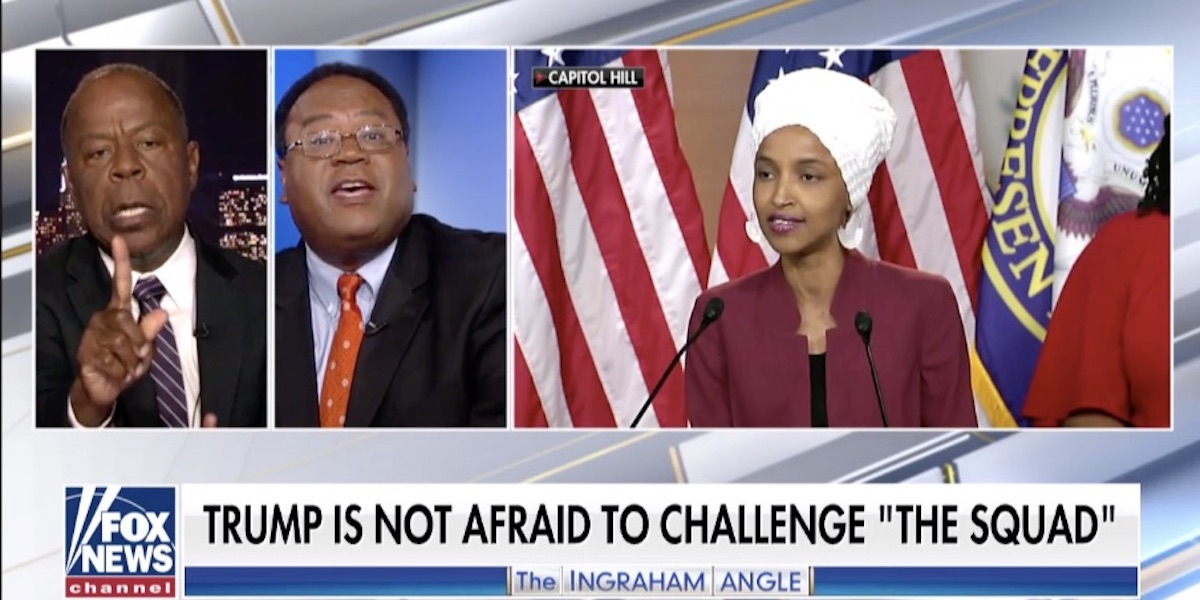 When the radical and racial statements of Representative Ilhan Omar forced the congressional leadership to act, the result – after much agonizing – was a muddled resolution condemning a broad range of “anti-Semitism, Islamophobia, racism and other forms of bigotry” that did not actually address Omar directly. But these same leaders were quick to push for a vote on a resolution calling out President Donald Trump by name and assigning racism to his criticism of Omar and other arch-left members of Congress for their wide-ranging complaints and intentions to fundamentally change America.

Project 21 Co-Chairman Horace Cooper, during a panel discussion on the Fox News Channel program “The Ingraham Angle,” said these members – now referred to as “The Squad” – are considered “too precious for anyone to criticize.” As for what they are saying, Horace declared “[t]here is hatred here” rather than with the President and his tweets.

Horace explained how the radicalism of The Squad – which is comprised of Representatives Omar, Alexandria Ocasio-Cortez, Rashida Tlaib and Ayanna Pressley – is based in a deep antagonism for America, and how President Trump’s comments were a common sense reaction to them:

People have to acknowledge what’s going on here. Their criticisms aren’t about improving America, aren’t about making some moderate changes. They literally do not accept America as it is.

The President called them out because our President loves this country.

In her discussion with Horace and fellow panelists Leo Terrell and Dr. Qanta Ahmed, host Laura Ingraham noted that President Trump is uniformly critical in these situations. She said that criticism of members of The Squad is not necessarily due to their race, suggesting that the President might also tweet something similar about someone who immigrated from France and professed similar complaints. Horace pointed out that President Trump did recently use such language about the British ambassador, who recently resigned in disgrace after leaked memos highlighted his disdain for the Trump Administration.

There’s nothing racist about that at all.

There is something curious about how this country has allowed people from every background to go to Congress, even to enter the White House, to join the Senate or even the mansions in California where the richest are. You can be any background in America – that’s what’s possible.

These people – they hate that.