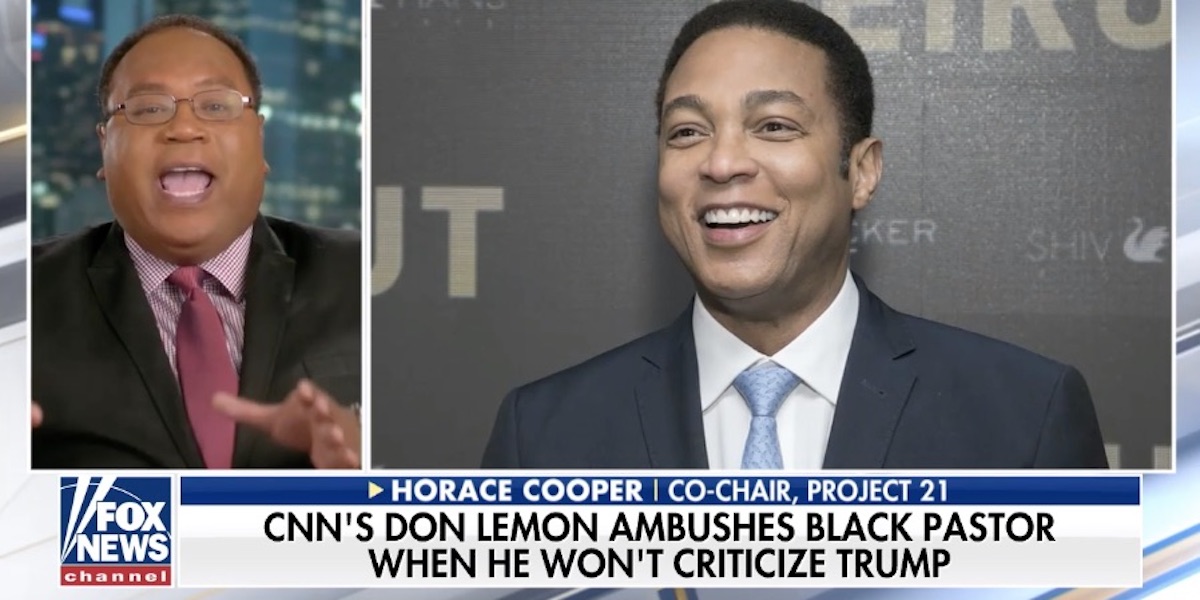 Don Lemon did nothing to dispel CNN’s reputation of being very liberal and incredibly biased against the Trump Administration when he recently  “ambushed” a black pastor invited on his show to talk about a meeting with the President.

Lemon spent the majority of the approximately eight-minute interview trying to get Reverend Bill Owens of the Coalition of African American Pastors to say that President Trump is a racist. When Owens would not, Lemon browbeat Owens with suggestions he was “condoning attacks” by not calling out the President. Owens was also cut off by Lemon when he tried to explain his positions.

In a discussion about the CNN interview and Lemon’s hostility toward the President on the Fox News Channel program “The Ingraham Angle,” Project 21 Co-Chairman Horace Cooper said that Don Lemon betrays the proper role of the press because he “has an axe to grind.” Dispelling the suggestions that President Trump is a racist, Horace said that “[a] racist would not have done all of the great things he has done for black America.”

Explaining Lemon’s lack of objectivity, despite CNN giving him high-profile assignments such as being one of the moderators of the recent Democratic presidential debates, Horace pointed out:

He’s a political opponent – not a journalist. He’s not even a talking head. He actually tries to weigh in any way to manipulate the outcome.

Regarding the Owens interview, Horace added:

And it was really, really irresponsible – and very unprofessional – the way that he handled that interview. Frankly, I thought there would have been a lot more deference to a minister brought into to discuss his ministerial activity.

As for what Owens said to Lemon about the President, Horace said:

He told the truth.

The pastor explained that the President is an equal opportunity offender. He doesn’t single out people… It means he’s not a racist. In fact, his record is the opposite of a racist. He’s put more pickup trucks in the homes of blacks. More homes.

Leo Terrell, Horace’s usual debate partner on Ingraham’s show, did not try to defend Lemon or his bias and even laughed at how CNN changed the description of Owens from “faith leader” to “controversial pastor” during the course of the interview with Lemon. But Terrell once again tried to validate the claim of President Trump’s alleged racism as a fact because of the results of a recent poll. Horace replied:

It’s unlikely that this line of presidential analysis will ever be a part of Don Lemon’s regularly scheduled CNN programming.