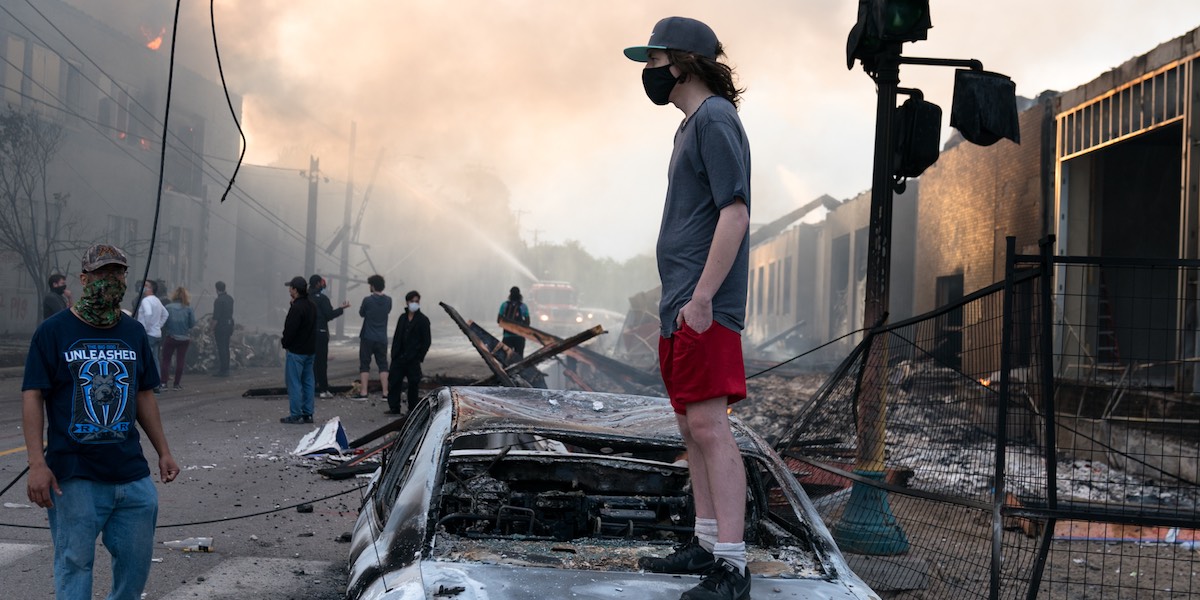 Americans of all stripes recoiled at the video of George Floyd’s death in Minneapolis, Minnesota. Elected officials all across America have condemned this needless act of violence. But many in the media, and activists across the land have gone further encouraging us to march and protest — implying that sitting on the sidelines is in some way complicity in Mr. Floyd’s demise.

After looters broke into an Old Navy, Nordstrom, and Banana Republic, Seattle City Councilman Teresa Mosqueda said she “understood it.”

Standing in front of a burning building, MSNBC host Ali Velshi declared the unrest in Minneapolis as “not, generally speaking, unruly.”

Consequently, huge throngs of Americans have joined the project all across America.

Even in a pandemic which is hitting poorer and elderly communities particularly hard, Americans continue being egged on to join the effort to force a prosecutorial reckoning for Officer Derek Chauvin.

But this impulse to demand a prosecution is dangerous.

It falsely assumes that without people standing in the streets, prosecutors won’t carry out their responsibilities. It also assumes that prosecutors are aided in their assessment of lawbreaking by protests. Finally, it risks contravening the proper operation of our criminal justice system and could result in Officer Derek Chauvin’s acquittal.

Here’s the truth: in a rule of law regime, a prosecution should never be undertaken at the behest of the crowd. It should be solely based on the alleged facts — and the law.

Instead it puts the rest of us at risk.

Once we allow prosecutions to be based on pressure campaigns, today’s popular protest member can easily become a prosecution target tomorrow

This isn’t merely an abstract concern. The actual record of mob justice should be particularly concerning especially for minorities.

History reveals that crowd intervention in criminal cases is replete with destruction for blacks.

Let’s begin with the late-19th century.

It was an uprising we now know a century later was part of an orchestrated media campaign bolstered by candidates and elected officials.

Originally labelled “Wilmington’s Race Riot” (in a bid to blame the victims), a mob of protesters funded by “interested elements out of state” overthrew the duly elected leaders of Wilmington, destroyed the only black owned newspaper, confiscated land, burned houses and killed more than 60 blacks.

Throughout the slaughter law enforcement was nowhere to be found.

Consider Atlanta in September of 1906.

After an extensive campaign in the media and on the streets, claiming that rapes of white women by blacks were skyrocketing, white mobs killed dozens of blacks, wounded huge numbers of other blacks, and did considerable damage to property owned by blacks.

For two days the mayhem and slaughter occurred unabated until Gov. Joseph M. Terrell of Georgia ordered the National Guard to intervene.

In 1917 in East St. Louis another mob rose up ostensibly over a claim that prosecutors hadn’t acted in a homicide case involving a white man allegedly killed by a black man.

This time the mayhem would last more than a week.

A toxic combination of lynching and arsons would result in 200 blacks murdered and 6000 blacks forced to flee leave their homes and livelihood. Again, the police stood by and the slaughter only ended when Illinois Gov. Frank Lowden called in the National Guard.

A few years later in 1921, Tulsa, Oklahoma was the site of mob violence.

Yet again, the crowd demanded a prosecution of a rape case.

Rather than allow the investigation to go forwardone of the most brutal race massacres in America took place.

Thousands of whites looted and burned the homes and businesses of blacks over a 35-city block area. Firefighters weren’t allowed to assist.

In this case, the National Guard didn’t arrive until well after the massacre was over.

These aren’t the only instances of mob violence.

Cases like these can be found up through the 1940s.

Mob justice resulting in the murder and plunder of innocent blacks in the name of outrage over the failure of the criminal justice system is a part of our history, one that we should never forget. Despite this history and the terrible deprivations resulting — it would take decades or more before these communities would recover — the lesson of encouraging mob violence seems to be forgotten.

All Americans — minorities especially — benefit from the dispassionate efforts by prosecutors to carry out their cases. Demands by demagogues that specific charges be filed against Derek Chauvin or anyone else are perilous.

It’s truly ironic that with the atrocious history of mob intervention in criminal cases that blacks have been so prominent in trying to affect Officer Chauvin’s case.

Yes, George Floyd deserves justice, but the way to guarantee him justice is to guarantee it for all Americans — free from pressure and coercion.

Horace Cooper is co-chairman of the Project 21 National Advisory Board, a senior fellow with the National Center for Public Policy Research and a legal commentator. This article was originally published by Newsmax.