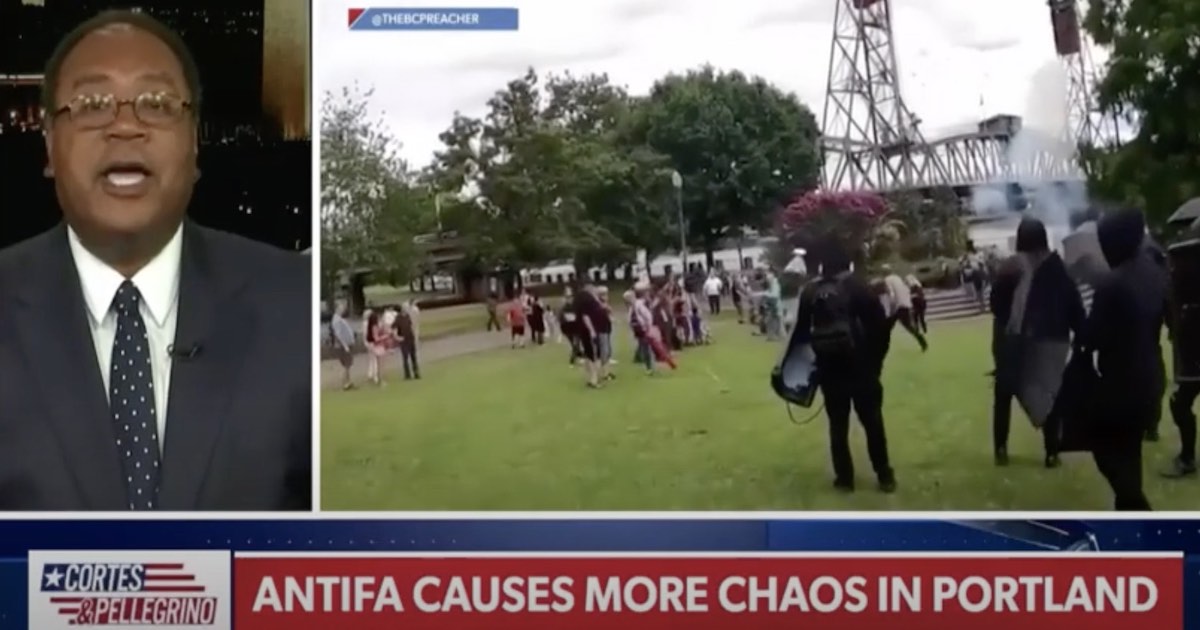 Not that the mainstream media is reporting about it, but Antifa radicals continue to terrorize the city of Portland, Oregon. One recent week, for example, there was an attack on a religious event in which a small child’s life was placed in peril.

Observing that this campaign of violence has lasted for more than a year, Newsmax host Steve Cortes said that it’s “unbelievable” that “we’re still hearing this now.” (And at least the Newsmax network is telling us about it!)

This lawless behavior – in addition to a general rise in crime since the death of George Floyd intensified defund-the-police activism – must be addressed. But, as Project 21 Co-Chairman Horace Cooper pointed out on Newsmax TV’s “Cortes and Pellegrino” program, President Joe Biden cannot be relied upon to address the problem because he doesn’t seem interested in the implications of it.

“It was our president who famously said during one of the presidential debates that there’s no such thing as Antifa – it’s just an idea,” Horace remarked. And he explained how this willful neglect of the problem has historical precedent in one of the darkest times of America’s history:

Apparently, a woman’s child was almost injured with a nearly deadly injury by nobody. Apparently, the fires, all of the explosives, all of the mayhem is being done by nobody. And this is apparently why you don’t need a prosecutor to prosecute anyone – because there’s nobody.

You know what it really looks like? This looks like the 1940s – in places in America where the [district attorneys] and the Klan cooperated to operate a reign of terror where the governors did nothing, the local mayors did nothing and they insisted that people accept this behavior.

Apparently, if you’re in Portland, the message is you’re supposed to accept this behavior.

Cortes asked Horace if he “believe[s] regular citizens have fully had enough” of this “crime explosion” and are interested in “some real reform.”

Expanding on the decriminalization analogy, Horace emphasized that “[t]hese academics, these woke progressives, the elite media have been doing a disservice to these communities.” The public – unsurprisingly – supports the cops and opposes the crooks:

The mainstream media has been very effective in creating this message – that is, if you are for black America, you are somehow against the police. And the academia has embraced this. Many corporate leaders have embraced this.

But when you actually ask black America, guess what? Black Americans, brown Americans and white Americans all say: Wait a second, if grandma’s going down to the pharmacy to get her prescription filled, that’s not an excuse for some gangbanger to beat her up, snatch her purse and put her in the hospital.

This is why black Americans, more than any other group when asked, they are saying they want to re-fund the police. That are more likely to be in favor of more law enforcement – not less law enforcement – than the population at large…

How about letting the people who have to live with the consequences of this dangerous behavior get a chance to speak and express themselves?

Co-host Jenn Pellegrino complained that the problems of crime and political intimidation are “not getting any better.” She asked: “What is it going to take to get back to where we once were?” And she specifically wanted to know how long the process would take.

“It may take a while,” Horace replied. Continuing to draw from historic precedent, he noted:

It started in the 1950s with the decriminalization movement that was talked about in the academy and universities. And then, some of our elite institutions and cities – places like San Francisco, places like Los Angeles, places like New York – became all but ungovernable in the late 60s and early 70s. And it wasn’t until the 1980s that Americans rose up.

If you look at that, that’s almost like a 25-year window. What would be a shame is – having learned so much about that – and if you look back, you’ll see blacks, whites and browns were all unified in pushing back against this.

“It would be a shame,” Horace lamented, “if it takes another decade for us to come back to understand the really, really dangerous lessons of the permissive attitude that the left has been encouraging.”