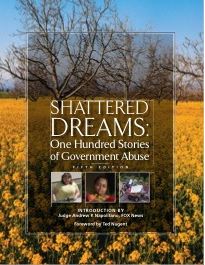 On March 28, the U.S. Supreme Court addressed the issue of the public financing of political campaigns for the first time since 1976 when it heard arguments for and against Arizona’s Clean Elections Act.

Matt Salmon’s failed 2002 gubernatorial campaign was the example.  When President George W. Bush hosted a fundraiser that netted Republican candidate Salmon’s campaign $500,000, the CEA — which rewards candidates who accept public funding with the equivalent raised by candidates who fundraise privately — gave Democrat Janet Napolitano and independent candidate Richard Mahoney $750,000 each (the gross amount raised at the Salmon event) from the pockets of Arizona taxpayers.

“Thanks to an Arizona law,” the Shattered Dreams report points out, “Salmon’s two opponents’ campaigns netted more from Salmon’s fundraisers than Salmon’s campaign did.”

By accepting the duty of raising his own campaign funds, [Salmon] severely disadvantaged himself, because the CEA financing rules effectively limited his own political speech and the speech of donors who supported him.

Since taxpayer dollars fund CEA candidates, paradoxically, an individual can make a private donation to one candidate while their tax dollars are used to fund their candidate’s opponent.

Another shortcoming of the CEA is its role in contributing to the state’s escalating deficit, which stood around $1 billion when Napolitano [who won the election in 2002] took office.

The Shattered Dreams assertion about curtailing speech was noted by attorneys for the Goldwater Institute, one of the legal challengers to the CEA, in the organization’s brief to the Court:

Likewise, Institute for Justice attorneys argued in their brief that the CEA compels candidates who seek to raise their own campaign funds to “choose between unfettered political expression and funding advantages for their political rivals.”

Early prognostication about the case subsequent to the arguments suggests that proponents of the CEA and public campaign financing may not be too happy when the ruling is released — most likely in late June.

Chief Justice John Roberts suggested during arguments that the CEA may curtail free speech, saying: “The effect may well be… ‘I’m not going to spend the money,’ and so the other candidates don’t get the money, and you have less speech.”  And Justice Anthony Kennedy, usually considered the Court’s “swing vote,” seemed staunchly ensconced with the apparent opponents of the law.

Grasping for hope to protect the CEA, Justice Elena Kagan posited: “I think the purpose of this law is to prevent corruption.”

The Shattered Dreams account of Salmon’s misadventure with the Clean Elections Act, by the way, can be found in the section of free speech issues.  It’s in between the Futon Factory’s quest to use outdoor advertising just like realtors and political candidates in Lynnwood, Washington and the fight “traditional” dairy farmers Joseph and Brenda Cochran had to keep from being forced to contribute to the federal Dairy Promotion Project’s “Got Milk?” advertising campaign (which they felt marketed inferior-quality milk).

A copy of Shattered Dreams can be downloaded from the National Center web site for free by clicking here.