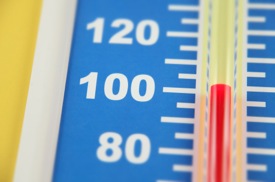 After reading a column by Jason Samenow of The Washington Post’s “Capitol Weather Gang” that asserted our area is again in the middle of all-time record high temperatures – something that’s been often repeated, but impossible to prove – I decided to send a message to Samenow pointing out some of the flaws in this assertion.

Samenow is the Post’s Weather Editor who until recently worked as – hold on to your hats – a climate change researcher for the Environmental Protection Agency. So, he’s really just a weather guy, no interest in promoting that climate change clap trap.

Here’s what I wrote:

“Your story, ‘July Heat in Washington was Unprecedented,’ was extremely misleading and given that you tied it in with global warming in your conclusion, it appears to have been deliberate.

You begin by stating that Washington’s July’s heat was unprecedented in 140 years and then go on to cite temperature data from Reagan National Airport as though this somehow proved your thesis.

But what is today known as Reagan National Airport did not open until 1941, just 70 years ago. Even assuming that the data from National is consistent from 1941 on (and this is a stretch given that the airport’s increased footprint and air traffic have undoubtedly affected the temperature readings), it certainly wouldn’t be consistent over the entire 140-year period. The area where the airport now stands was previously under water and therefore whatever data you used was from another location.

You similarly misled with your citation of temperature readings from BWI Airport, when you state that the 106 degree temperature on July 22 was the second highest in Baltimore’s weather records which date back to 1871. Here you didn’t quite lie, but clearly intended to imply consistency in the records. Again, what is today BWI did not open until 1957 (as Friendship International Airport) and even assuming consistency in instrumentation and that increased airport footprint and traffic have had no influence on temperature readings, you can’t claim to have consistent data as measurements were clearly taken at more than one location.

Did July break temperature records? Maybe, maybe not… I don’t know. But neither do you. For you to suggest otherwise is dishonest.”

Much to Samenow’s credit, he responded back quickly and it appears that the inaccuracies weren’t all his. Here’s what he wrote…

“Thanks for your note. The version I submitted to editors contained this information about the DC station change:

‘Unpacking the relative contribution of urbanization and greenhouse gases to the warming is difficult locally, compounded by the fact the location of D.C.’s observing station changed from 24th and M St. for most years prior to 1941 to Reagan National airport thereafter.’

It got axed in the editing process due to space constraints – in addition to another several hundreds words documenting more heat records than there was room to print.”

So there you have it, there’s no room for accuracy at The Washington Post. I think we always knew that, but now confirmation!

Samenow went on to say that he thought that given the “incredible number of heat records” set the past two years (wow! How’s that for a long-term trend!), he thought his piece was “pretty measured.” He then provided a link to another Post piece on the topic (http://www.washingtonpost.com/blogs/capital-weather-gang/post/july-2011-the-hottest-month-in-washington-dc-history/2011/07/31/gIQAd8rOnI_blog.html).

“I was very pleased to see that you tried to work in information to make your article more precise, but disappointed that your editors sacrificed accuracy for space.

I’m not sure I would agree with you that the piece was ‘pretty measured,’ given that the omission affected the accuracy of your piece.

It’s clear that we’ve just come through a pretty hot month. My issue isn’t with the statement that Washington is in midst of one of the hottest Summers, but the specificity of the rankings in light of obvious difficulty in consistency with the data. Similar errors are repeated throughout the piece on everything from the supposed increase in number of days above 90 to the number of records being set throughout the country. Can we rely on such ‘records,’ given the previously mentioned inconsistencies? Can we rely on them given that the vast majority of surface stations throughout the country fail to meet the National Weather Service’s standards to be located 100 feet or more from artificial heat sources? I don’t think so. Yet, this is the house of cards upon which some of these warming trends rest.

While I appreciate the greater data detail in the blog link you provided, it, too, misleads readers by saying that we’ve been through the hottest month in recorded history and then following up with data that doesn’t prove that point. It provides baselines from 1981-2010 and 1971-2000. This says something about today’s temperatures compared to the past 40 years, but nothing about recorded history.

I hope you’ll keep in mind that there’s nothing wrong with using qualifiers and conceding uncertainties in writing such pieces. Don’t let the story get in the way of a good fact.”