22 Aug 2011 Does Mayor Bloomberg Stand to Profit from Sierra Club’s “Beyond Coal” Campaign?

I ran into this anti-coal advertisement by Michael Bloomberg when visiting a Tina Korbe post on HotAir.com: 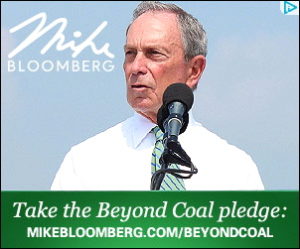 Michael Bloomberg did not become a billionaire and a successful politician without knowing a few tricks. As the National Center for Public Policy Research has pointed out more than once, a trick of some politically-connected businessmen is to invest heavily in something, and then move government policy in the direction of supporting it (e.g., General Electric and solar power, the Pickens Plan, or Al Gore and global warming), via tax subsidies, laws or regulations.

Michael Bloomberg has just donated $50 million to the Sierra Club’s “Beyond Coal” campaign.

He has posted a video of himself talking about “a new energy path” on his YouTube channel.

His personal website covers coal prominently and claims it is important for the country (read: government) to “accelerate the transition to cleaner, cost-effective energy sources.” 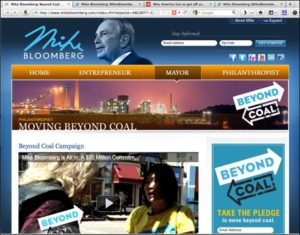 Yet, 56 percent of America’s electricity is generated from burning coal.

And his Sierra Club partner has opposed generating electricity with nuclear power for nearly 40 years. 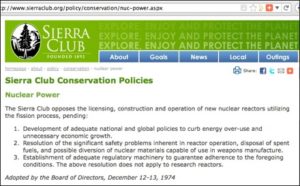 And opposes large-scale hydropower, too. 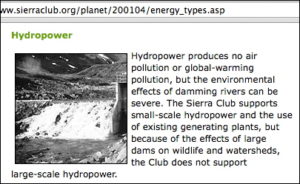 And Bloomberg does not seem to be a big backer of new methods for obtaining natural gas.

What will Americans do without 56 percent of our electricity? Does Michael Bloomberg expect us to do without, or to get it from some other technology?

If so, which? And is he invested in that technology?

Will he profit when coal plants are shut down? While Americans lose one of our lowest-cost sources of electricity? And all those coal jobs?

So I tweeted back a question. 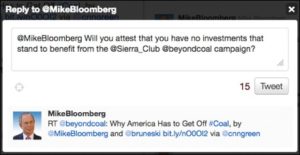 That was on August 7.