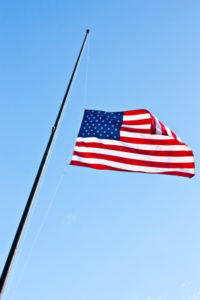 American flag on a blue sky during a windy day

This finding, however, mysteriously disappeared from a final version of the talking points on the tragedy distributed among White House staffers.  Petraeus claims to not know who made the edit on the report that removed the Al Qaeda determination.  And, in an administration that is supposed to be rooted in transparency and accountability, Petraeus’ then-deputy Mike Morell and Director of National Intelligence James Clapper also proclaim ignorance as to the identity of the person who removed the vital information about the attack that led to the murder of four Americans – including our ambassador in Libya (the first such high-ranking assassination since the Carter Administration).

This might seem to create some plausible deniability for Ambassador Susan Rice, who is said to be the heir apparent to Secretary of State Hillary Clinton’s spot at the top after Clinton resigns to undoubtedly run for higher office.  But Rice’s ascendance is currently in question because of her September 16 appearance on five Sunday news shows in which she blamed the attack and the murders on a spontaneous protest against the “Innocence of Muslims” YouTube video.

After all, Susan Rice’s carpet-bombing of the networks with the narrative that the YouTube video led to random violence seriously diverges from the initial, unedited intelligence analysis and was the ruse which the Obama Administration hid behind for weeks.

Despite the proclamations of some pundits, Project 21 member Kevin Martin doesn’t think the Petraeus testimony absolves anyone, particularly Ambassador Rice.

Citing Susan Rice’s past, Kevin says the ambassador still has a lot to answer for when it comes to her mid-September assertions about Libya, YouTube and no links to Al Qaeda terrorists.

In particular, Kevin notes that Susan Rice’s comments on September are similar to behavior she allegedly exhibited in 1994 when she is said to have been a party to ignoring the genocide in Rwanda in favor of protecting then-President Bill Clinton’s political viability.

Despite having intelligence at the time that the international community needed to determine that genocide was indeed an issue in Rwanda, Rice – who was then a Clinton Administration staffer at the National Security Council – allegedly shocked colleagues on a conference call by saying about the policy option of confirming facts of mass murders in the African country: “If we use the word ‘genocide’ and are seen as doing nothing, what will be the effect on the November [congressional] election?”

According to a extensive 2001 article about Clinton Administration’s fumbling in the Atlantic by Samantha Power, Rice denied saying that, but said it would have been “irrelevant” if she had said it.  Not that she said she said it.

The Rwanda debacle, by the way, is remembered by President Clinton as the worst mistake he made during his time in office.  That includes cheating on his wife with an intern in the Oval Office!  And, from all the evidence, it would seem Susan Rice was knee-deep in causing that mistake in order to ensure the short-term protection of her boss.

Kevin thinks history may be repeating itself.  He says:

Ambassador Susan Rice’s Sunday morning media tour in September was likely never rooted in any real truth.  It now seems that later admissions and revelations about the attack on our consulate in Benghazi, Libya betray what she said were the real reasons for the violence that killed four American heroes.

It appears it was known almost from the first moments that the attack on September 11 was a coordinated terrorist assault carried out by Al Qaeda.

As these facts trickle out, it becomes clear to me that Susan Rice was showing her true colors as a political hack for the administrations in which she has served.  She appears to have a history of dispensing what can only be seen as half-truths and perhaps even outright lies to cover-up for and promote her bosses.

In 1994, Susan Rice and others in the Clinton Administration essentially turned a blind eye to genocide in Rwanda rather than divulge information that would require the United Nations – and, by extension, the United States – to take action.  Accounts from that time suggest that Susan Rice preferred to keep the terrible facts about death beyond comparison in Africa a secret instead of risking a situation just prior to an election that might make President Clinton look bad.

It looks like Susan Rice might have employed the same tactics this year before the presidential election.  Was it to help deflect blame for the Benghazi attack away from the Obama Administration?  Was it to keep alive the Obama campaign assertion that Al Qaeda was decimated?

Given Susan Rice’s apparent predilection to put the interests of her superiors before the public interest, I wonder if she can give truthful testimony on this or other diplomatic or national security matters.