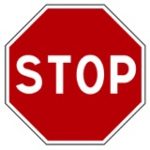 I almost never post recordings of my media interviews in this blog, but I decided to make an exception today for a radio interview I recently did on the question of whether Congress should approve President Obama’s request for permission to attack Syria.