On the January 7, 2014 broadcast of Al Sharpton’s MSNBC Show “Politics Nation,” Bill Nye of “Bill Nye the Science Guy” tries to have it both ways on climate change.

It’s hard to do both, as he proves.

On Al Sharpton’s show, at the 4:17 mark, he says of the cold snap, “It’s very reasonable that this is the result of climate change.”

Then he protects himself from criticism by noting, correctly, “Tying one specific event to this larger, decades-long change is very difficult…”

But then he spins again: “However, it is consistent with what we’d expect.” 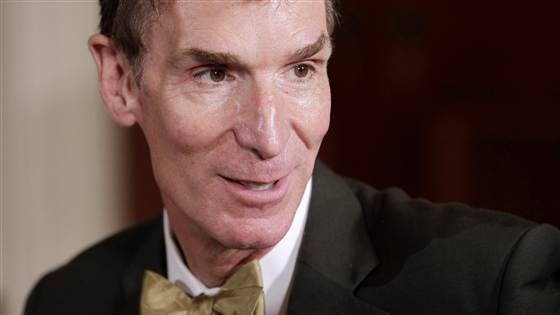 If Nye were playing this like a true scientist, that is, objectively, he’d explain that the weather this week proves nothing about the catastrophic global warming theory — either way. Instead he twice implies cold weather could be occurring because the global warming theory is valid, with just enough straight talk to provide cover.

Nye doesn’t exactly impress with some of this other comments on this broadcast. At about 5:05 he says the problem is not global warming, but the rate of increase of CO2 in the atmosphere. That’s an odd thing to say, because most of the purveyors have been saying the problem IS global warming, and that said global warming is caused by the increase (not necessarily the rate of increase) of CO2 in the atmosphere. Furthermore, Nye says support for his belief comes from the fact that many more people now live on the earth than did 264 years ago. Even if his novel theory was right, the population growth doesn’t prove his theory.

But you be the judge. Here’s Nye in his own words:

The concern is not that the world was not once warmer, or that there was not once more carbon dioxide in the air than there is now. It’s the rate, it’s the speed at which we are adding these greenhouse gases that is of deep concern because we have now, instead of in 1750, let’s say about a billion humans on earth, now we have over seven billion humans on earth, and so pumping out all these carbon dioxide and other greenhouse gases as we all try to live the way we do in the developed world, it is going to be very difficult for large populations to make adjustments. And that is why we’re concerned. So this is a teachable moment, this very unpleasant cold snap.

Does that make any sense?

But to be fair, it can be hard to organize thoughts on television. Maybe this is unusual for Nye.

Ryan Maue is a Ph.D. meteorologist, and his reference is to an MSNBC interview of Nye advertised by MSNBC as:

Here’s how Nye blamed the February 2013 blizzard on global warming in that MSNBC broadcast:

This could be the future, everybody. This could be the new normal. With all the extra heat energy in the atmosphere, climate change, this could be the way it is going to be, a lot. People say, well it’s a blizzard. How can it be global warming? Well, the difference between snow and rain is very small. It’s just a few degrees Celsius, a few degrees Farenheit. When the sea surface gets a little more heat on it… there is more evaporation. There’s more moisture in the air. And here we are.

I have never seen one of the broadcasts Bill Nye does for kids. Maybe it is all safe stuff, such as putting sugar into club soda and watching it fizz. Maybe all he talks about is asteroids. Maybe he truly is inspiring a generation of young people to grow up to be scientists.

Sadly, though, if he is, he’s not inspiring them to be good scientists. You know, critical thinkers.

In this story, “Progressive America has a brand new hero: Bill Nye the Science Guy,” Bill is quoted saying, “I fight this fight out of patriotism.”

Perhaps he is fighting for his own brand of patriotism, but notice he doesn’t claim to be for objectivity.

Addendum: Dr. Ryan Maue has tweeted to suggest another example of Bill Nye’s creative thinking (my terms) on climate, here. It is worth visiting.

Addendum, 1/13/14: A friend pointed me to this December 2013 debate between Bill Nye and Marc Morano of CFACT on CNN’s Piers Morgan Tonight (video and transcript here). Nye was massacred. Nye used the same talking points he would later use in the MSNBC interview, above (the rate of acceleration of CO2 and relative population sizes), wasted time most debaters would have used to argue a disputed point to pin Morano down on the question of whether atmospheric CO2 levels have been increasing (this is not under dispute), and falsely claimed Medieval-era and Roman-era natural warm periods only occurred in Europe. Not long into the interview, Piers Morgan essentially took over for Nye. My sense is that, for all that he talks about climate issues often, Nye does not follow them closely, and I suspect Piers Morgan has reached the same conclusion.