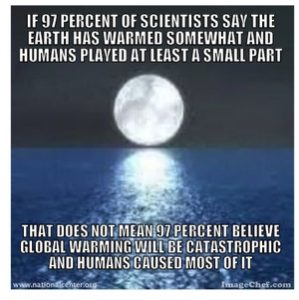 In the last few weeks I’ve had an op-ed in about three dozen newspapers across the country on the theme “top ten reasons why Congress should ignore advice to pass major legislation to combat climate change.”

It contains this paragraph:

Claims that 98 percent of scientists endorse the global warming theory are propaganda. To get to 98 percent, activists include every scientist who believes the Earth has warmed even a little, and that humans have paid even a small part, but activists use the 98 percent figure as if it represents only scientists who believe warming is catastrophically dangerous and overwhelmingly human-caused. Since even “skeptic” scientists believe the Earth has warmed somewhat since the 1800s, when the Little Ice Age ended, and almost everyone believes humans have played at least a small role in warming by building cities and using energy, that means skeptic scientists are included in the 98 percent figure, which then is used as “evidence” that skeptic scientists are wrong.

After the article ran in the Schenectady Daily Gazette, Dr. Jeffrey D. Corbin, an associate professor of Biological Sciences at Schenectady’s Union College, wrote a letter to the editor in rebuttal containing the following:

I suspect The Gazette patted itself on the back when it decided to “debate” whether there is evidence enough to act on climate change by publishing Ms. Ridenour’s piece with a companion article by professor Michael Kraft.

However, to “debate” this reality with one writer on each side does not give your readers the proper context of where the balance of scientific opinion lies. 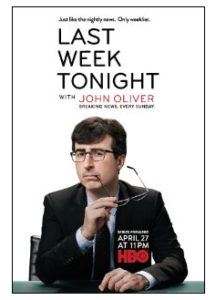 Since John Oliver staged a “statistically representative” climate debate on his HBO show — in which three climate deniers had the opportunity to challenge 97 scientists who acknowledge reality — we should expect the same numerical accuracy on the pages of our newspapers, as well.

In the future, if you publish a, say, 400-word discussion of climate-change facts, you should limit the opposing viewpoint to 12 words. Only then will you present climate change in a way that accurately represents the balance of scientific opinion.

While it is entirely likely that many people do not know the false basis of the claim that 97/98 percent of scientists believe in the catastrophic global warming theory, Dr. Corbin cannot credibly claim ignorance here, because:

Anyone following the public debate on climate change at all closely will already know how the climate-change-is-a-looming-disaster propagandists twisted data in a throughly dishonest way to mislead people into believing that nearly all scientists disagree with the so-called global warming “skeptics.” Dr. Corbin, as an expert in ecology and “global change,” should already have known this, but if he somehow didn’t, my piece, which he must have read, since he wrote to complain about it, would have clued him in.

Yet he used the false argument anyway (citing a comedy show, no less).

What does this tell us about the weaknesses of the arguments available to those who claim we need to spend many billions of dollars, kill jobs and raise energy prices to combat human-caused catastrophic global warming/climate change?

That they must be pretty darn weak, if this is the best the professor could do.

It also tells us Union College, at $60,000 per year, may be very overpriced. John Oliver is funny, but he’s no source for science facts.

Additional notes: 1) The discrepancy between “98 percent” of scientists in my op-ed and “97 percent” of scientists in John Oliver’s HBO show and Dr. Corbin’s letter is due entirely to my error. The correct number as determined in the study we’re all speaking of (Cook, et. al., 2013) is 97 percent. 2) Dr. Corbin also made the claim in his letter that, “every year since 2000 has been hotter than the average global temperature of the 1990s” and thus “we are warming, no matter what Ms. Ridenour wishes to believe.” I will address this only briefly for those who do not have time to think through the obvious weakness in logic. The Earth stopped statistically significant warming in the late 1990s (exact year depends on the dataset used) and temperature has remained essentially stable. The Earth did warm throughout most of the 1990s. Therefore, the decade+ following the 1990s will logically be warmer than the average of the 1990s because the early years of the 1990s, in general, were cooler than its later years and, since temperatures have remained stable since, the years following. This is not, as Dr. Corbin claims, a proof that we have warmed since 2000. It is an illustration of basic math (the average of some cooler and hotter temperatures is lower than the value of just the hotter temperatures) and entirely consistent with the observed “pause” in global warming since the Clinton Administration. 3) I provided a link to my op-ed as it appeared in the Milwaukee Journal-Sentinel instead of the Schenectady Daily Gazette because I can find no evidence that the Daily Gazette published it online, however, the op-ed (whose title was not written by me) was identical when submitted to each of the newspapers.