Project 21 has issued a press statement noting that President Obama’s immigration policies, both formal and rumored, are biased in favor of Hispanic immigration and against immigration from African nations.

Among other things, they note that S. 744, the immigration bill passed by the Senate last year and very strongly supported by Obama, eliminates the diversity visa program. 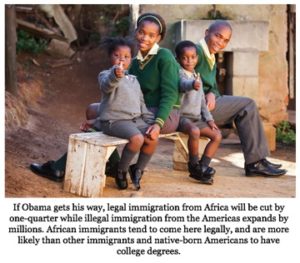 Thus, if Obama gets his way, expect legal immigration from African nations to drop by a quarter.

This possibly is not what naturalized American citizens from Africa had in mind when they enthusiastically supported Obama’s election in 2008, with many citing Obama’s connection to Africa (his biological father being Kenyan) as the reason for their enthusiasm.

To be sure, other Democrats and Republicans oppose continuing the diversity visa program. Some believe its design (in brief, a visa lottery eligible only to citizens of nations with historically low immigration to the U.S.) lets in riffraff, although I haven’t heard them use that word, exactly.

Columnist Michelle Malkin believes terrorists could win entry to the U.S. through the lottery. The thing is, though, if you win the lottery you still have to go through a screening process. If the screening process needs to be toughened, we can toughen it. We don’t need to throw the baby out with the bathwater.

Prominent Members of Congress prefer requiring immigrants to have certain skills or letting them immigrate because they have family members in the United States.

One reason is that diversity — a decent word ruined by liberals — is a good thing when we’re talking about immigration, because having a lot of immigrants from many different places is a lot more likely to lead to a melting pot than having the same number of immigrants from a much smaller number of places.

The melting pot is a good thing. It forges Americans.

For this reason I also believe policymakers make a mistake to emphasize family reunification in immigration policy, because it leads to over-represented countries being increasingly more and more over-represented.

It’s one thing to let in a spouse of a permanent legal resident or citizen, or minor children, or elderly parents, but at this point, two-thirds of legal immigration into the United States is for family-reunification purposes, and that’s just nuts. 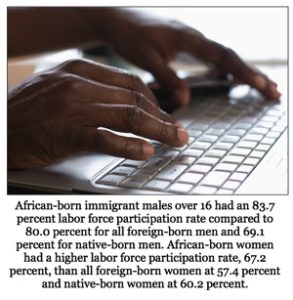 We worry that a visa lottery followed by a screening process will let in terrorists, but we let in adult, married children and adult siblings? Terrorists have siblings, too.

If a person wants to live with his or her entire extended family, he or she might consider staying home. Or visiting them! Many native-born Americans live thousands of miles from their adult siblings, parents, etc. inside or outside the United States and we don’t consider it a hardship. We consider it a choice.

Letting in people with desired skills is fine, but it doesn’t have to be at the expense of letting in folks from under-represented regions (typically Africa, eastern Europe and Australia).

People in under-represented countries have skills, too. As Project 21 pointed out about immigrants from Africa:

I reviewed a White House Fact Sheet released in August 2013 to placate criticism from Americans who support inclusion for African natives in our immigration policy, and found it pathetic.

Most of the arguments made for why the White House’s immigration policies are good for African immigrants cited policies that are even better for Latin Americans than for Africans. I think it is ironic and sad that even in a White House run by a man whose biological father was African, the Africans are nonetheless second-class would-be citizens.

Other White House arguments in the Fact Sheet are demeaning, such as the emphasis on letting illegal aliens among the African immigrant community “out of the shadows.” Unfortunate terminology aside, this is insulting to an immigrant community that overwhelmingly has not chosen the illegal immigration route. Obama is in fact placing non-African illegals ahead of Africans who played by the rules in the immigration line, and insulting them in the process.

Also demeaning were White House statements that imply Africans should especially like reforms that let in refugees. Should an African person have to become a refugee to get the same shot at immigrating here as a Mexican or Central American who is far more likely to have a relative who is a U.S. citizen or permanent resident (or to marry one)? Family reunification policies do include Africans, but you have to have family here first, and, mostly, Africans don’t and Central Americans and Mexicans, relatively speaking, do.

In response to some criticisms, Obama backers have noted that Obama supported the diversity visa program in 2006, when he was a Senator, and they say he couldn’t control what was in the Senate-passed immigration bill.

True, but he could have leaned on the Senate to make sure African immigration wasn’t cut any further than it already is, and he didn’t even try, with the result that passage of the Senate bill Obama so ardently supports is likely to cut already-meager African immigration by a quarter while legalizing many millions of immigrants from Latin America.

Furthermore, a White House immigration proposal intended to be a “Plan B” if Capitol Hill could not craft an immigration reform plan palatable to the White House made no mention either of retaining the diversity visa program or removing it but including some other process to make certain African would-be immigrants have the same shot at emigrating here as otherwise equally-qualified people from other parts of the world.

Personally, I don’t believe the President cares about this issue. Africans don’t immigrate here in sufficient numbers to sway national elections, and in any case, as Project 21 noted, they tend to settle in CA, DC, NY and MD, which are not swing states. Hispanic immigrants are here in much larger numbers and are much more diverse in where they have chosen to settle geographically, making them much more interesting to people who are consumed by politics.

But for those of us who still value the melting pot, making sure Africans (and eastern Europeans, Australians and others from under-represented countries) get a fair shot within our legal immigration programs — if not via the diversity visa program, then by some other mechanism — just makes sense.