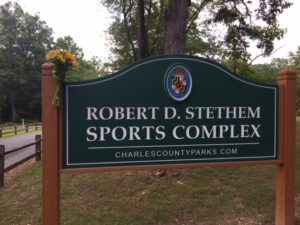 On this day in 1985, the lifeless body of Navy diver Robert Stethem was dumped on the tarmac of the Beirut International Airport by Hezbollah terrorists who hijacked TWA flight 847.

Prior to his execution, he had reportedly been beaten and tortured.  Why?  Stetham was targeted because he was a member of the American military.

Stethem grew up in the Washington, D.C. suburb of Waldorf, Maryland.  To honor him, the Charles County government dedicated a group of athletic fields in his name.  The facility includes a stone monument to Stethem.

It seems, however, that Charles County officials and virtually everyone else have now forgotten Stethem’s sacrifice to our nation.

My wife and I drove the 25 miles from our home in Northern Virginia to the Robert D. Stethem Memorial Sports Complex on Sunday the 14th (the date the memorial there erroneously lists as when he died) to pay our respects.  We found the gates of the facility chained up and secured with three padlocks.  Not wanting to trespass, we left the flowers we brought attached to the sign along the main road.

From the looks of the county parks and recreation as well as the general government web sites, it appears officials in Charles County are oblivious to or uninterested in the major anniversary of one of their greatest heroes and facility namesake.  Locally, one community did remember – but the county as a whole may be taking a pass.  A quick Google search seems to indicate everyone else has similarly forgotten the sacrifice of Robert Stethem. 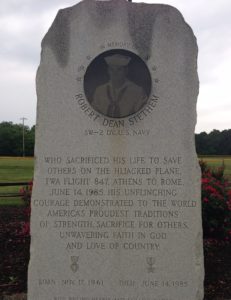 Please take a moment to remember Master Chief Constructionman Stethem (posthumously promoted from steelworker 2nd class).  He wasn’t Chris Kyle or Rob O’Neill – he was merely a humble serviceman returning home from an innocuous assignment abroad.  He was targeted for heinous abuse, a bullet to the temple and carelessly thrown from the hijacked plane solely because of his nationality and his vocation.

Of the four hijackers, only one was caught and convicted (but subsequently walked free).  Another died in 2008 – an apparent victim of an act of terrorism.  The others have disappeared.

Terrorism, 30 years later, remains a major problem facing the United States and the world.  Do not let Robert Stethem, or other victims of cowardly acts of terrorism, be forgotten.