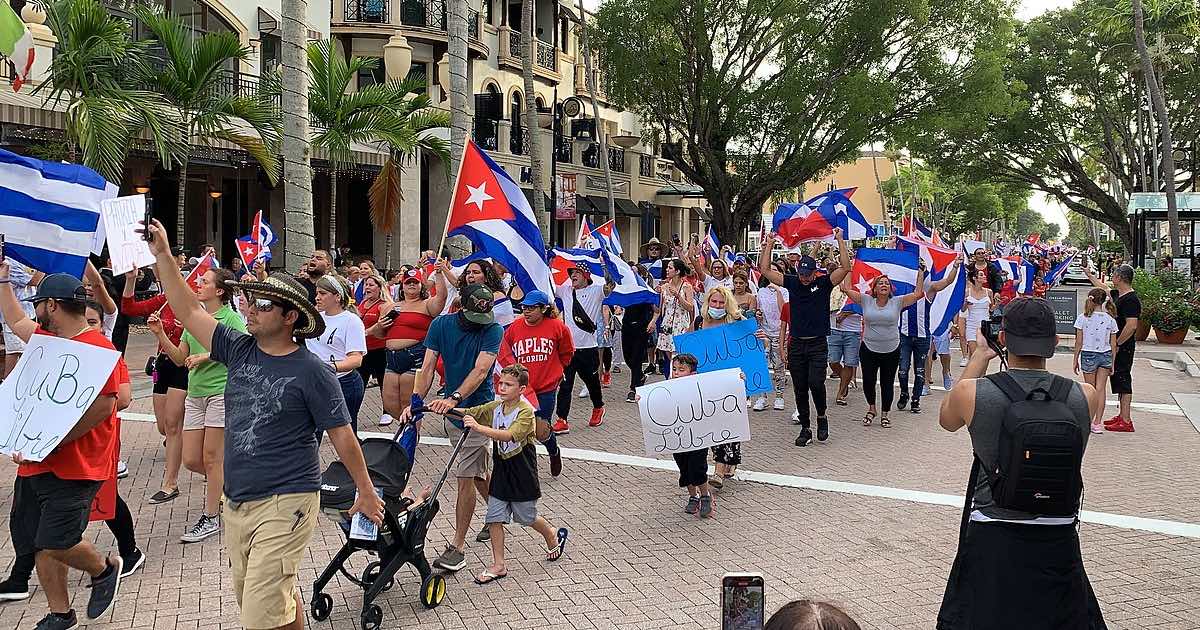 ConservativeBlog.org
Posted at 23:59h in Blog by Davis Soderberg

Queremos libertad! Queremos libertad! (“We want our liberty!”) is echoing in the streets of Havana as Cuban citizens protest the nation’s odious regime. For more than 60 years, the country’s communist authorities have terrorized its citizens and stunted the growth of Cubans’ ingenuity and standard of living. Though the revolts may not dethrone the sitting regime, they highlight, yet again, what many around the globe desire more than anything: liberty and freedom.

Cuban authorities have fired live ammunition at dissenters and cut internet service throughout the days of protest in hopes of silencing the freedom movement and blocking any media from being released to the outside world. One video, however, has gained traction. It shows the crowd chanting “we are not afraid” as a man waves an American flag in the air.

This isn’t the first time the American flag has been used by protestors on foreign soil to voice objection to a tyrannical regime. In 2019, pro-democracy fighters in Hong Kong waved the American flag and sang the U.S. national anthem in opposition of the Chinese Communist Party’s (CCP) attempt to gain control over the territory.

These freedom fighters, in both Cuba and Hong Kong, who have suffered immeasurably under draconian dictators, use our flag for a reason. The American flag is a symbol of hope. Our flag is still a banner of a better, freer life to many, and that’s something of which we should be proud.

In present day America, however, many people have mixed emotions about what our flag really represents. Over the 4th of July weekend, the Utah chapter of Black Lives Matter posted a picture of our flag with the following caption:

Each year there seems to be more outrage over flying the American flag, even though the flag has long represented our patriotism in love of country, unity in shared principles and gratitude to be living in a nation of limitless opportunity.

Senator Marco Rubio, whose disabled grandfather escaped from Cuba for America in hopes of a better life, described his family’s past:

My dad was a bartender. My mom was a cashier, a maid and a stock clerk at K-Mart. They never made it big. They were never rich. And yet they were successful. Because just a few decades removed from hopelessness, they made possible for us all the things that had been impossible for them.

Why do so many Americans ignore examples like this? Just two generations after Rubio’s family escaped from Cuba, the son of a bartender and a maid ran for president of the United States as a sitting U.S. senator. That is why America is exceptional. This, of course, is only one story of the American Dream being fulfilled; there are millions and millions of them.

Just ask a Cuban migrant like Maximo Alvarez, who spoke emotionally during the 2020 Republican National Convention:

I may be Cuban born, but I am 100 percent American. This is the greatest country in the world. If I gave away everything I have today, it would not equal 1 percent of what I was given when I came to this great country: The gift of Freedom…. My parents only wanted one person to decide my fate—me. Not some party member, not some government official, not some bureaucrat —– in America, I would decide my own future.

Every year, millions dream of stepping into a new life in America, and even the Americans who complain and shame our nation for so-called inequities, greed, discrimination, racism, bigotry – well, they refuse to leave. Why is that? Isn’t there another place for those who despise America to go?

There is one specific reason why people never leave, why people will sacrifice their lives on a treacherous journey for the prospect of making it to our shores: In America, the cards you are dealt at birth do not determine or limit what you can do in life. The possibilities and opportunities are endless. This is the defining characteristic of our nation.

When reflecting on places like Cuba and Hong Kong, Americans must cherish this notion. Let these examples be a reminder that our nation is unique.

Socialist sympathizers Alexandria Ocasio-Cortez and Bernie Sanders are doing everything in their power to avoid admitting what the Cuban uprising again demonstrates: that their beloved political philosophy has done inconceivable harm to the human race. Crickets are singing a symphony in the Cortez quarters, while Sanders irrationally threw all the blame on U.S. sanctions.

It’s absolutely mind-blowing that the radical left has such a hard time confessing to the failures of a dictatorship. In fact, the excuses have changed nearly every day in their attempt to protect the ideas of centralization and government-controlled living.

Initially Julie Chung, the assistant secretary of the U.S. Department of State Bureau of Western Hemisphere Affairs (this job title should show you how obnoxiously vast our government bureaucracy has gotten), blamed the riots on COVID-19, posting: “Peaceful protests are growing in Cuba as the Cuban people exercise their right to peaceful assembly to express concern about rising COVID case/deaths & medicine shortage. We commend the numerous efforts of the Cuban people mobilizing donations to help neighbors.”

I guess thousands of maskless protestors chanting “freedom,” “we want our liberty” and “we are not afraid,” in the mind of Julie Chung, equated to concern about the coronavirus. That’s been the left’s approach for the last year and a half: blame anything and everything on the virus when you’re feeling political pressure.

White House Press Secretary Jen Psaki tried to pin the Cuban regime’s failure and the uprising on “economic mismanagement.” I’ll quickly rephrase this phony political phrase to save us some time: Socialism and centralization don’t work. Ever. Sadly, the progressive left refuses to acknowledge this in hopes of protecting their big-government ideology and agenda.

It is equally interesting and concerning that those who are truly oppressed in foreign nations seem to have more respect for our flag than many living in the States today. Among Americans we see hatred of our country, flag burning, disrespect during our anthem (I would dare such people to try these demonstrations in places like Cuba and China) and a deep lack of gratitude for our principles.

So many Americans have gone blind to the riches we are given by being born in this nation. Our citizenry has become obsessed with pointing a finger at the “privileged” when I would invite them to look abroad. We all have a privilege: the American privilege.

It is paramount that we veer from the path on which we are headed. For the time being, I’m not entirely optimistic. Pessimism is most warranted when observing our youth, the future leaders of our great nation. Among America’s young adults (18-34), an Axios/Momentive poll reported that 46% of them have a negative view of capitalism, with 54% of the youngest respondents (ages 18-24) having a negative view. Just two years ago, this percentage among young adults was only 38%, demonstrating a radical jump in the wrong direction in a short period of time. Additionally, this same poll showed that 51% of the same age group has a positive view of socialism.

This is incredibly alarming. This trend reflects a complex political phenomenon that has been unfolding for nearly 60 years, beginning when neo-Marxism fled Europe and made its way into American universities, later leaking into every other American institution and poisoning their foundations.

This form of leftism is still most apparent in universities, and it’s a clear sign why so many graduating students enter adulthood with a collectivist mindset. An increasing number of woke schools are now teaching Critical Race Theory (CRT), which can simply be explained as race-based Marxism.

CRT follows the exact same structural formula, but with differing roles. This theory, which is now being taught and/or advocated for in public schools, pushes the idea that in America, since its founding, all of the national institutions were created to ultimately oppress minorities and boost the power and control of white Americans.

This ideology will do unprecedented harm to America’s youth. It’s no wonder that so many young adults have a favorable view of socialism. They are being told that the institutions that govern our nation are rigged to oppress people on the basis of skin color, and that any “inequity” found in society is a result of a systemic problem. Citizens who are fooled into believing this no longer accept any kind of personal accountability in their own decision making and turn to the state to solve their problems.

I firmly believe that many societal problems (not all) could be minimized by better individual decision making, but CRT promises that this is never the case; it’s always the fault of the “system.” In the mind of the CRT-indoctrinated youth, then, they must work to dismantle the very principles, values and institutions that have long held our nation together with new collectivist, big-government programs. As a result, liberties and freedoms are stripped from the people, and government grows to an insurmountable size.

America is not perfect. It never has been. We are fully aware that our history is deeply intertwined with racism and slavery. No one is denying this. Slavery is America’s original sin and something we should never fail to recognize as disastrous. But failures are part of human nature, and the strides we have made over the course of our history are worth commemorating.

Our founding documents still stand 250 years after their conception, protecting the belief that all men are created equal, and are endowed with the inalienable rights of  life, liberty and the pursuit (but not the guarantee) of happiness. These rights, as our Founders believed, are not given to us by the government, and the sole purpose of government authority is to protect our rights from being violated. The world recognizes the beauty of this belief. It is why so many fly our flag in the face of tyranny and embark on a quest to live out the American Dream.

The United States still has changes to make and we still have hurdles to jump, but let’s not forget that this country is special. Cuba is the most recent reminder.