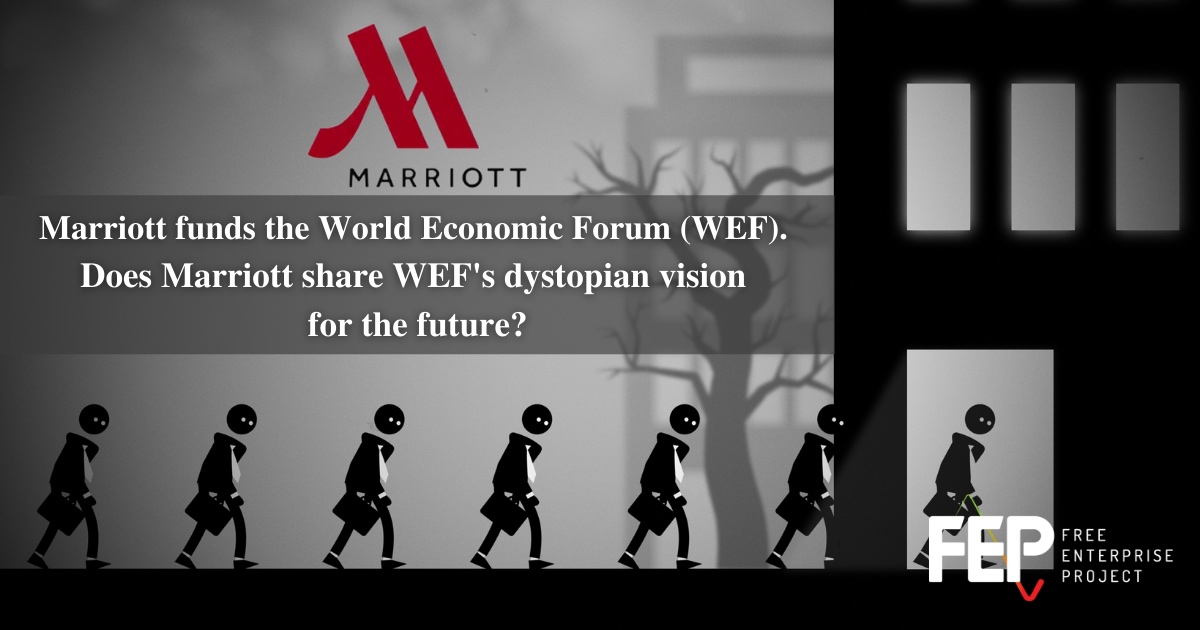 Washington, D.C. – Marriott executives today tried to dissociate themselves from the dystopian ideals of the World Economic Forum (WEF) while still defending their use of shareholder money on the controversial organization and its ritzy retreats in Davos, Switzerland.

At Marriott’s annual shareholder meeting, held virtually today, leading investor activists from the Free Enterprise Project (FEP) questioned Marriott International CEO Anthony Capuano about whether the company’s sponsorship of WEF should be seen as the company’s endorsement of WEF’s many questionable goals.

WEF lists Marriott as a partner, but Marriott doesn’t disclose this spending to its shareholders. Why is Marriott willing to financially support WEF, but unwilling to be forthright about it to shareholders?

WEF openly advocates for transhumanism, abolishing private property, eating bugs, social credit systems, and a host of other blatantly Orwellian objectives. Do you share this vision for the future? If not, are you willing to end Marriott’s partnership with WEF?

Since Capuano didn’t take shareholder questions directly – as would be customary at an in-person annual meeting – the questions were pre-screened and paraphrased by a moderator who instead asked why Marriott was willing to financially support WEF.

Marriott supports a variety of organizations that provide forums for our executives to meet with business partners, policy makers and other important stakeholders. Participation in those business groups does not represent an endorsement of their positions.

Capuano’s response can be heard here. Peck’s question can be read here.

“Capuano didn’t back away from Marriott’s support of WEF – he doubled down,” said Peck after the meeting. “He admitted to shareholders that Marriott reallocates shareholder money to WEF whether or not the board agrees with WEF’s agenda, and that this spending is justified because WEF provides an opportunity ‘for our executives to meet with business partners.’ What he’s admitting to there is that Marriott uses shareholder funds to finance ritzy vacations to Davos for its executives so that they can meet with other executives from other companies who are also on ritzy vacations on the dime of other shareholders. And that this is all fine and good even if that money is then used to advance WEF’s anti-human agenda.”

“Using shareholder assets for vacations is not acceptable under any circumstances. And that’s true even if WEF was a transparent organization dedicated to doing nothing but solving world hunger, But WEF is not a transparent organization solving world hunger. It is the polar opposite, and completely discounting that is insane,” said Peck. “So it’s reasonable to assume that Marriott takes absolutely no issue with WEF’s agenda. Whether or not executives are willing to admit that publicly, people vote with their wallets more than their mouths. And to make matters worse, in this case they’re not even using their wallets; they’re using ours.”

“Capuano’s response is absurd,” agreed FEP Director Scott Shepard. “The World Economic Forum isn’t a neutral 18th century coffeehouse. It’s a massively influential organization with a very definite plan for a ‘great reset’ of the whole world’s civilization. And that plan is deeply nefarious: transhumanism, a propertyless society (for everyone except the WEF elite) and diminished and restricted lives for the mass of humanity at the dictate of WEF partners. Belonging to the WEF is absolutely an endorsement of its malevolent plans, and a sponsorship of them. If Marriott executives want to hear good ideas, Davos is the last place they should go. They’d be better off calling up twenty shareholders at random — and when they do, they should apologize for this disgraceful waste of shareholder assets.”

Conservative investors can learn more about corporate support for WEF’s dystopian agenda by downloading FEP’s 2022 editions of the “Investor Value Voter Guide” and the “Balancing the Boardroom” guide. Other action items for investors and non-investors alike can be found on FEP’s website.

Today’s meeting marks the 25th time FEP has participated in a shareholder meeting in 2022. To schedule an interview with a member of the Free Enterprise Project on this or other issues, contact Jenny Kefauver at 703-850-3533 or [email protected].