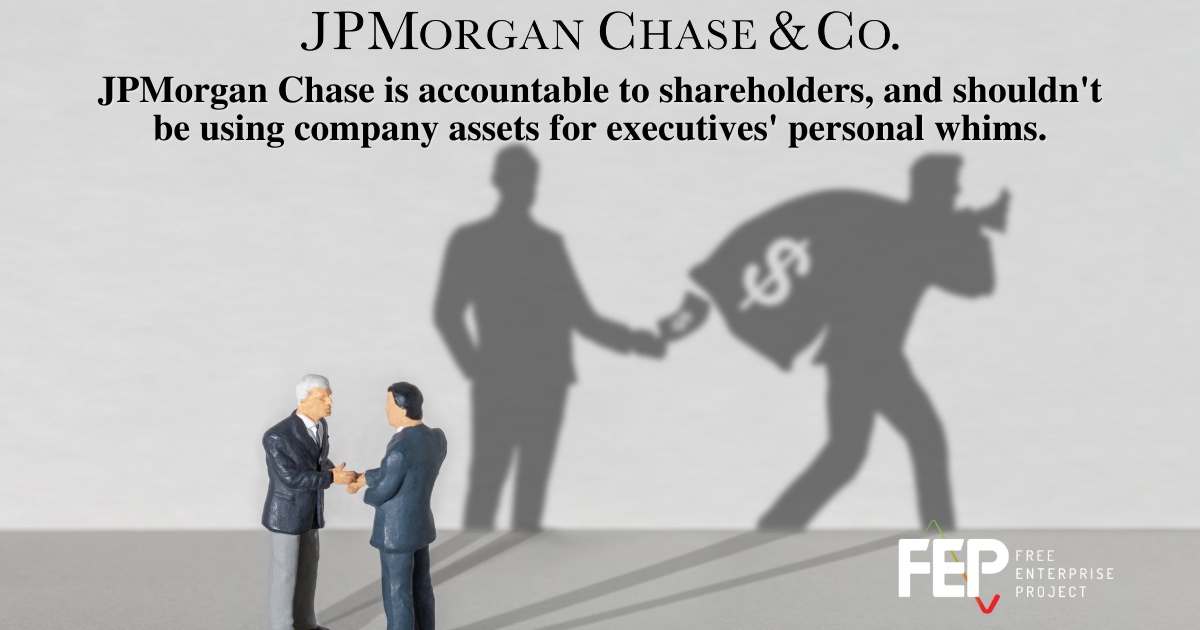 If Bank Insists on Embracing “Stakeholder Capitalism,” It May Need to Become a Public Benefit Corporation Instead

Washington, D.C. – At today’s JPMorgan Chase & Co. annual shareholder meeting, the Free Enterprise Project (FEP) presented a tongue-in-cheek shareholder proposal suggesting that the banking giant redefine itself as a public benefit corporation due to its embrace of so-called “stakeholder capitalism.”

FEP Associate Ethan Peck, who presented the proposal at the virtual meeting, argued that the bank’s stakeholder capitalism model – which seeks to serve all stakeholders instead of just shareholders – better matches the definition of a public benefit corporation than the bank’s current status as a conventional Delaware corporation.

“JPMorgan wants to have its cake and it eat it too,” Peck said after the meeting. “It pretends to ‘serve all stakeholders’ but then refuses to make the legal adjustments required to ‘serve all stakeholders.’ Of course, it’s all just a bluff. But that bluff has ramifications, because it allows executives to continue to corrupt the dynamic between the board and its shareholders. This gives board members a heightened ability to pursue special interests and enrich themselves in the process.”

“Of course Jamie Dimon did not want to turn JPMorgan into a charitable corporation, though that’s the only legal way to enact the ‘stakeholder capitalism’ that he purports to support. It was all a ruse,” Shepard said. “Dimon wants to control the economy and to reach further into the social policy of the country and the world, but he considers himself far too grand to have to run for or be appointed to anything official. For him, stakeholder capitalism has always been about putting his personal policy preferences in the mouths of convenient stakeholders, allowing him to ignore the company’s and shareholders’ interests in pursuit of his own. All of this is terrifically illegal, and intensely unwise at a too-big-to-fail bank. We’ll see what comes of it all.”

Peck also submitted a question regarding JPMorgan’s financing of the controversial World Economic Forum (WEF), which can be read here. Since the meeting was held virtually, a moderator was given the opportunity to pre-screen shareholder questions, and the question was ignored outright.

“Jamie Dimon sees himself as not just a CEO, but rather a global leader responsible for addressing ills such as war in Europe, racism, sexism and every other ism, but he doesn’t have the fortitude to address a straightforward question from a JPMorgan shareholder,” said Peck. “What a wimp. I’m sure Xi and Putin are terrified of him.”

Investors wishing to oppose left-wing corporate donations, stakeholder capitalism and other “woke” policies infiltrating Corporate America should download FEP’s 2022 editions of the Investor Value Voter Guide and the Balancing the Boardroom guide. Other action items for investors and non-investors alike can be found on FEP’s website.

Today’s meeting marks the 32nd time FEP has attended or attempted to attend a
shareholder meeting so far in 2022. To schedule an interview with a member of the Free Enterprise Project on this or other issues, contact Jenny Kefauver at 703-850-3533 or [email protected].