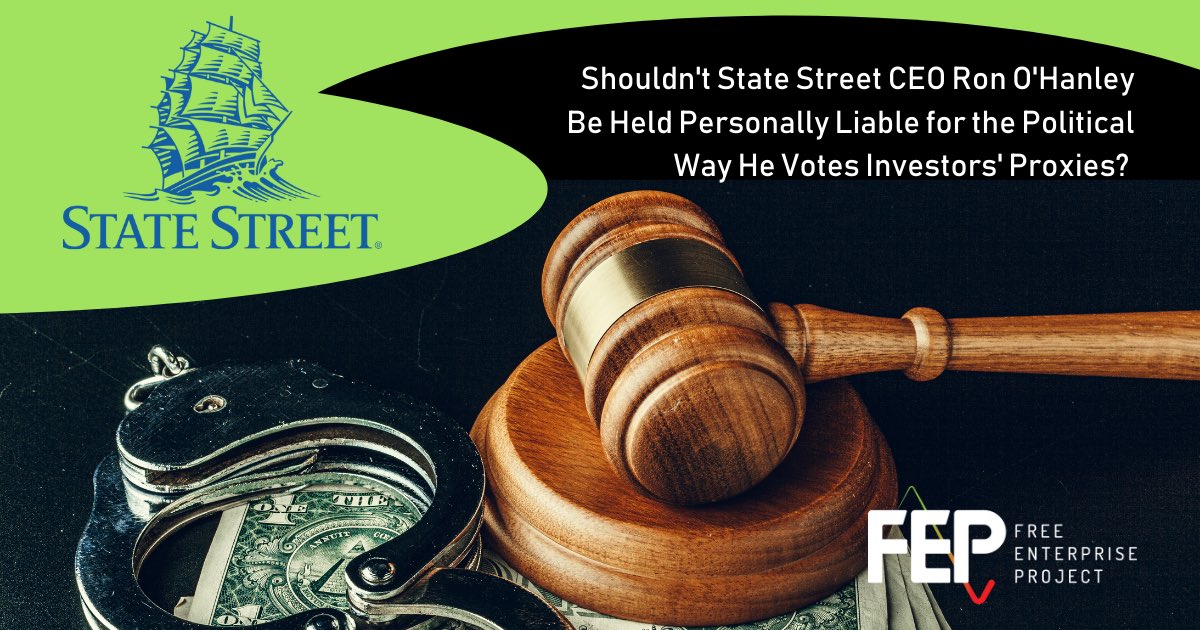 18 May 2022 State Street’s Subjective Definition of Risk Opens Executives Up to their own Risk of Personal Liability, Say Shareholder Activists

Washington, D.C. – At today’s State Street annual shareholder meeting, executives told the Free Enterprise Project (FEP) that the company’s climate and diversity policies are justified due to long-term risk, but FEP representatives noted that even the executives’ assessment of risk opens them up to legal liability for self-dealing.

“State Street’s claim to objectively analyze all risks is demonstrably false, underscoring that its commitments and actions are politically motivated rather than based in objective and complete research,” said FEP Director Scott Shepard after the meeting. “It has shown the courts how to evaluate its claims to the contrary: just look for the risks that the company knows exist, but refuses to consider objectively. And when the courts conduct that analysis, and reveal the self-dealing, I’m sure that State Street CEO Ronald O’Hanley and his board of directors will be more than happy to make good their error from their massive personal fortunes — which, by the way, violate the most basic tenants of the equity-based theories that they are happy to push on others, regardless of obvious legal and moral risk.”

Year after year, Mr. O’Hanley, you claim that your embrace of ESG isn’t woke and isn’t partisan. Yet the two initiatives you most aggressively push on other corporations are equity and politically motivated carbon-elimination schedules. But equity means illegal race-, sex- and orientation-based discrimination now to make up for past discrimination until equality of outcome – irrespective of merit – is achieved. And politically driven decarbonization looks certain to decimate economies and beggar the poor and middle classes. Both are exclusively hard-left positions. There is no objective evidence to prove that they are good for any businesses. Why specifically should you not be found personally liable for the consequences of all of this self-dealing in privileging your personal policy preferences over your legal duties to shareholders and investors?

Thank you for the question. We at State Street are one of the world’s largest investors. We invest over $4 trillion on behalf of our clients. Much of that is in very long-term investments consistent with the liabilities of our clients, which themselves are very long-term. Hence, our stewardship does focus on long-term issues.

And there’s really two ways to think about our stewardship. As I said in my earlier remarks, it’s about value to our clients, not our values. And secondly, it’s about risk. And risk is nothing more than the proposition that more things can happen than will happen. And if one thinks about the long term, and thinks about things like climate for example, I think it’s reasonable for investors to believe that there is some kind of risk out there that climate and climate change will have some impact on companies and therefore our underlying portfolios.

So, the focus of our ESG activities is again not about pushing any kind of personal policy but ensuring that the boards of directors of the companies in which we invest are exercising proper oversight towards these risks. Climate is not the only risk that we ask them to look towards. We ask them to look towards other general risks, as well as specific risks related to the company.

As far as Diversity, Equity & Inclusion, I think it’s fairly evident at a time like now, when we’re seeing long-term labor shortages, that for that reason alone, we should be focusing on making sure that there’s diversity, equity and inclusion in the labor markets.

But again, I would go back to: This is about, what is it that can create value for our portfolio companies and in turn for our clients? And secondly, how do we ensure, and what’s the evidence, that the boards of directors of the companies in which we invest are overseeing long-term risks? And I think our lead director, Amelia Fawcett, would also like to respond to this question.

Fawcett, who serves as State Street’s lead Independent Director, then chimed in:

I just thought it was important for me to state for the record and for Mr. Shepard that, as the lead director, I would like to note that the board strongly supports Ron and management and their efforts to create long-term shareholder value and support our clients, our employees, our investors and our communities.

Equally, all ESG factors have to be considered by any entity – whether it’s a profit or a not-for-profit entity – looking to add value to their diverse stakeholders and to build sustainable businesses over the long term. And that includes, bearing in mind, a wide variety of risk. The sustainability of business models and communities include, including as you quite rightly point out, the impact of climate actions on communities – we do need to look at those, and we do – means we have to look at ESG matters and we do that regularly.

Let me be very clear: this is not about 60-second soundbites for partisan news programs. It is a complicated, long-term effort to produce long-term value for all our stakeholders and for us to create better outcomes for the world’s investors and the people that they serve. The board and management is focused on this day in and day out under the talented, deeply committed and unstinting leadership of our chairman and CEO. Thank you.

The reading of Shepard’s question, and the responses from O’Hanley and Fawcett, can be heard here.

O’Hanley and Fawcett spoke at length about the need to account for all risks and company sustainability over the long term, and claimed that by doing so they ensure that they are acting not on their personal policy preferences, but in the best long-term interests of the companies that they invest in and all stakeholders. But State Street manifestly does not consider all risks, and in choosing which risks to privilege and which to ignore, it reveals that it is acting on personal policy preference rather than the objective best interest of its investors and shareholders.

Likewise, in pushing companies to adopt carbon-elimination schedules that fit political rather than financial, technical or even coherent environmental timelines, the company ignores a massive array of risks for political reasons. Where does it calculate the risk that non-Western countries will not eliminate carbon, but will increase its output, making diminutions by American corporations irrelevant? Where does it factor in the significant possibility that the current claims of looming but fixable catastrophe are wrong — in either direction? For decades now, we’ve heard that we only have the next 8 or 10 or 12 years to save the planet. If those were all wrong, why is this newest batch of predictions correct? If they were right, then it’s too late for carbon reductions to matter, so we had best juice the economy to be able to respond fulsomely to what’s now inevitable. Where does it factor in the effects that political carbon schedules will have on the poor and middle classes, and on economies generally, and on geopolitical stability? What has it learned from the current nightmare in Europe? Where does it factor in the massive ecological harms that arise from securing what’s required for supposedly clean-energy alternatives?

“It’s clear from O’Hanley and Fawcett’s responses that they view corporate board members as their minions,” added FEP Associate Ethan Peck. “They think it’s State Street’s responsibility to ensure that board members of the corporations in which they invest – which is essentially every major corporation – capitulate to the woke requirements of ESG that State Street has a hand in setting. What’s most concerning about that is that it’s probably true – board members are, in a way, just State Street minions.”

Peck also noted that the executives’ answers today represented a shift from the company’s usual justification for ESG policies:

State Street isn’t shy about demonizing investing that prioritizes profit, and it flaunts its support for ESG and stakeholder nonsense under the guise of moral responsibility. But as soon as we questioned executives about the clear immorality of such policies, they reversed course, claiming that ESG is justified because it’s better for the bottom line.

Investors wishing to oppose the ESG agenda and other “woke” policies infiltrating Corporate America should download FEP’s 2022 editions of the Investor Value Voter Guide and the Balancing the Boardroom guide. Other action items for investors and non-investors alike can be found on FEP’s website.

Today’s meeting marks the 34th time FEP has attended or attempted to attend a shareholder meeting so far in 2022. To schedule an interview with a member of the Free Enterprise Project on this or other issues, contact Judy Kent at (703) 477-7476.