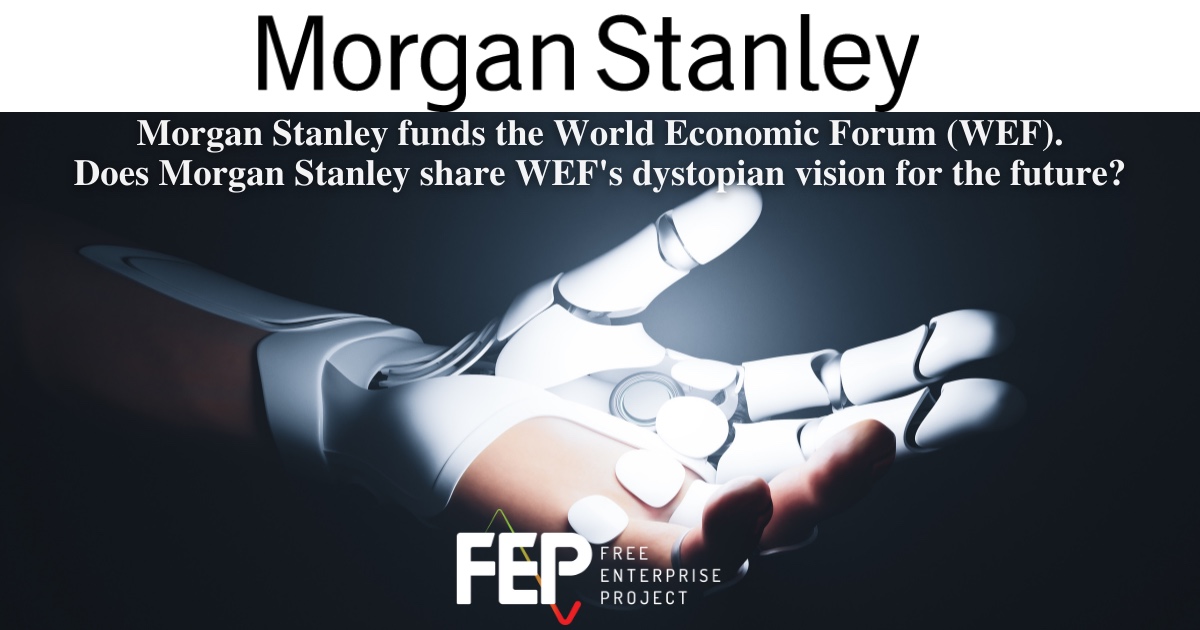 26 May 2022 After Twelve Years in Davos, Morgan Stanley CEO Claims Not to Know WEF Agenda

Morgan Stanley is a partner of the World Economic Forum (WEF), which openly advocates for transhumanism, abolishing private property, eating bugs, social credit systems and other blatantly Orwellian objectives. Do you share this vision for the future – one that Morgan Stanley shareholders are, in effect, funding? If not, will you end the partnership with WEF?

Mr. Peck, I’m not familiar with some of those things that you’re suggesting. Certainly I’ve had no experience of it in my, I think, 12 trips to Davos. I couldn’t go this year because it actually is today, I believe, or yesterday.

Listen, the World Economic Forum brings together a variety of opinions from leaders and thought-provoking individuals around the world. There’s many platforms expressed there and many points of view – certainly some that I don’t share. But we participate in it because we want to be an agent for constructive dialogue around the globe.

The exchange can be heard here.

“After ‘twelve trips to Davos,’ James Gorman is unaware of the core tenets of the WEF’s agenda?” Peck asked after the meeting. “Either he is clueless and irresponsible with shareholder money, or he is lying. I put my money on lying, since he puts our money in Klaus Schwab’s hands.”

“Gorman is full of it,” agreed FEP Director Scott Shepard. “The transhumanism of the ‘Fourth Industrial Revolution,’ and the ‘Internet of Bodies,’ are not ideas randomly floated by one or two participants; they are the fully endorsed positions of the WEF, in which Gorman admits to being deeply involved on the shareholder dime for quite a long time indeed. It’s impossible that he doesn’t know that. He also can’t help but know that a propertyless future (for peons not invited to the WEF), bug protein and all the rest are WEF-endorsed positions. Meanwhile, can he point to anyone at the WEF who’s standing up to say that this is all dystopian nonsense? Or to instances in which the WEF published such contrary thoughts under the WEF banner? He cannot. He is making material misstatements at an annual shareholder meeting to misinform investors. That will not do.”

“While I don’t buy his performative naivety, even if it was genuine, the board still bears responsibility for how shareholder money is being put to use,” added Peck. “Being oblivious is not a sufficient excuse for funding the ‘Fourth Industrial Revolution’ and ‘The Great Reset’ – both titles of Klaus Schwab books, by the way.”

FEP discussed WEF’s agenda, and the corporations and CEOs supporting it, in this year’s edition of the Investor Value Voter Guide.

The Morgan Stanley meeting marks the 47th shareholder meeting that FEP has attended or attempted to attend so far in 2022. Peck submitted this WEF question at five other virtual shareholder meetings this week (Merck, BlackRock, Chevron, Amazon and Meta) and was ignored by each of those companies.

To schedule an interview with a member of the Free Enterprise Project on these or other issues, contact Judy Kent at (703) 477-7476.

Investors wishing to oppose left-wing donations and other “woke” policies infiltrating Corporate America should download FEP’s 2022 editions of the Investor Value Voter Guide and the Balancing the Boardroom guide. Other action items for investors and non-investors alike can be found on FEP’s website.