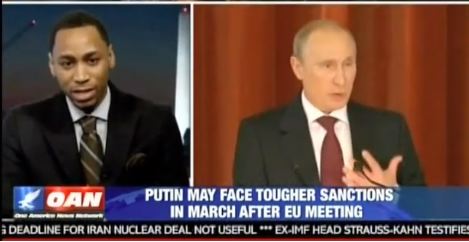 “Brian Williams’ career at NBC is dead,” said Project 21 member Gianno Caldwell, “but it’s alive and well if he wants a job at TMZ.”

Gianno made a big splash during his first appearance on the One America News Network and first live media for Project 21!

On the 2/9/15 edition of “The Rick Amato Show,” apart from that light-hearted zinger near the end about the embattled NBC anchorman, Gianno largely discussed serious foreign policy issues during Amato’s “Grassroots Citizens Panel.”

Talking about the upcoming meeting between the French, German and Ukrainian governments to try to work out a solution to end Russian intervention into Ukraine — and German Chancellor Angela Merkel’s refusal to help arm the Ukrainians — Gianno said:

She should really be sending lethal weapons to the Ukrainian people to fight.  And, I believe, in that particular situation, that she wants a diplomatic situation after it’s been so long of an ongoing crisis that a diplomatic solution is less likely to be had.

It’s better for us to have a presence and be prepared just in case than to have nothing there at all… We’ve seen time and again that with conflicts like these — they may start off as small, but they grow big and become detrimental to our safety as well.

Switching gears to the invitation for Israeli Prime Minister Benjamin Netanyahu to address Congress, and domestic political fallout over it, Gianno said:

I kind of disagree with Speaker Boehner breaking protocol.  However, I think it might have been necessary to hear from the Israeli people to [determine] what their thoughts are so we can come up with a real strategy [for the Middle East] moving forward.

Asked about the feelings of lawmakers he has interacted with, Gianno added:

Folks are more willing to hear from the prime minister directly so they can get his views, and also directly have a communication link to him, rather than going through [the White House].

Gianno also called hip-hop star Akon “admirable” for planning to hold a concert to raise funds for anti-ISIS forces fighting the terrorists in Kurdistan.  Besides the monetary support Akon is bringing to the fight, Gianno said there is a valuable cultural benefit as well:

I think the attention that he’s bringing to this very, very important cause is going to bring more celebrities to the table and fold.  And, as you know, a lot of millennials get their information from social media… This is going to cause more folks to know more about ISIS.