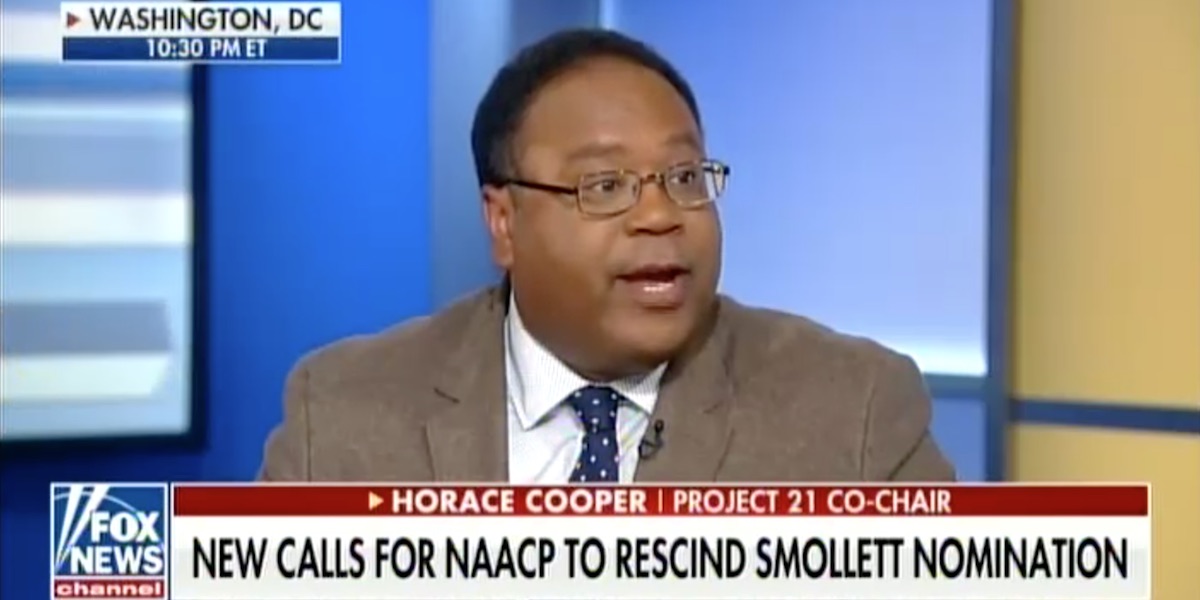 The fact that actor Jussie Smollett, who is suspected of staging a hate crime against himself, is still under consideration for an NAACP Image Award “tells you everything we need to know about Hollywood.”

That’s what Project 21 Co-Chairman Horace Cooper concluded during a segment of “The Ingraham Angle” on the Fox News Channel.

Smollett’s case, an alleged attack that morphed from outrage over a reported racial and homophobic act of violence into what should have been embarrassment for him and his supporters, gets curiouser and curiouser by the day. A thorough investigation by the Chicago Police Department concluded Smollett worked with two people he knew to stage the attack. Smollett was indicted by a Cook County grand jury, but the State’s Attorney’s office dropped the charges because they felt his surrender of a $10,000 bail bond and less than a day’s community service with the highly political Operation PUSH (a Jesse Jackson enterprise) was enough restitution.

Horace told host Laura Ingraham that this all reeks of extreme privilege that rewards the powerful at the cost of justice and the reputation of the police:

Here is an example – in Chicago – where the police did what we wanted them to do.

They gave this serious consideration. They brought the resources to bear. No one was injured. No one was accused of misbehavior.

And they brought a case forward. The prosecutor’s office says – yes – you’ve done everything right. And the grand jury – 16 counts – they say this behavior needs to be accounted for.

This time, they just allowed him to walk. If that’s not privilege, I don’t know what privilege looks like…

If you or I or any other normal, mainstream American were to have engaged in these kinds of behavior, we’d be held responsible.

And it seems Smollett has friends in very high places. Former first lady Michelle Obama’s old chief of staff appears to have been brought in to collude with the state’s attorney and try to get the case moved from the Chicago Police Department to the FBI. Then it turns out the state’s attorney didn’t actually recuse herself from the case and the files were sealed. Yet the prosecutor’s office said it stands by the investigation while the police and mayor’s office railed against what they consider to be a travesty of justice.

Smollett’s camp thinks he’s vindicated. This weekend, he may even receive an NAACP Image Award – an honor that’s supposed to go to “individuals or groups who promote social justice through creative endeavors.”

Project 21 has called for the NAACP to rescind Smollett’s nomination for “Outstanding Supporting Actor in a Drama Series.” The NAACP has refused to comment. With all of the concern about privilege these days, Horace pointed out that the way Smollett appears to be escaping his responsibility is the personification of privilege:

People who are elite – like the Hollywood types – they’re able to come in. There IS a divide in America, and it’s between Main Street and these elites.

It’s about time that people recognize what’s really going on, and it starts with the NAACP. He should not be considered for any kind of honor.

@IngrahamAngle Yes!! #Project21 #HoraceCooper Thank you for taking a Stand!!

@Project21News Mr Horace Cooper, Heartful thanks for your clear and unafraid interview with Ms. Engle at her program this evening. Your unequivocal sincere and courageous statements are refreshing events in national news shows @FoxNews @CNN @LindseyGrahamSC @thehill

@Project21News Horace Cooper is 100% correct. It’s not about race at all. It’s about status and privilege of these Hollywood-types #Smollett #IngrahamAngle