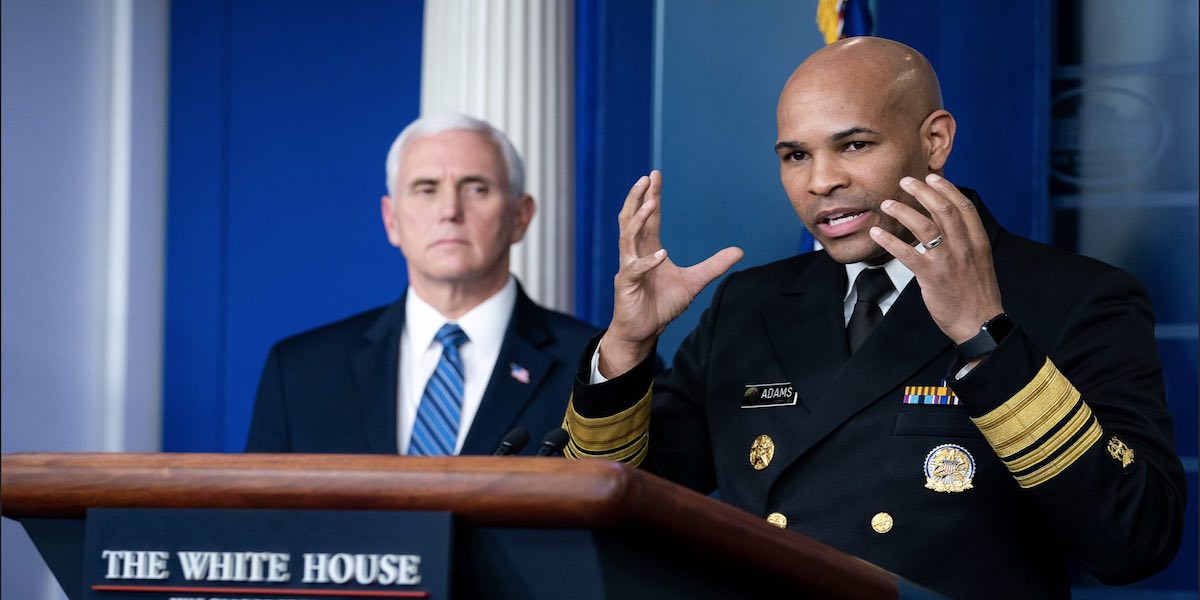 Is the surgeon general tone-deaf about minorities? At a recent White House coronavirus press conference, he was questioned by a PBS correspondent who suggested that his wellness plea to minority communities had “offended” people who were lashing out against him on the Internet even before the press conference was over.

That’s actually a pretty hard case to make considering that Surgeon General Jerome Adams is black. Additionally, some the language Adams used, that PBS White House correspondent Yamiche Alcindor cited as enraging the online community, included things he admitted saying to his own family and friends.

But the taxpayer-subsidized PBS threw the allegations out there. While Alcindor was called out online herself for asking the question, it has nonetheless generated a lot of headlines and undoubtedly has a lot of people talking. Will everyone talking about it know the full story?

Perhaps the media should answer a few questions. How much of this sort of questioning is simply making the Trump Administration’s job harder? When the president needs to command the attention of the American people, are baseless allegations of racial insensitivity like this hurting the government’s ability to communicate with all of the public about important virus-fighting strategies?

When you are always adversarial towards President Trump and have an unhealthy desire to be a victim because of your particular political persuasion, it’s easy to see how Ms. Alcindor could have construed the surgeon general’s remarks as “offensive” to African Americans. I personally don’t see a problem with the surgeon general specifically warning his community – a community disproportionately affected by the coronavirus – on lifestyle choices which can increase the severity of the disease. Doing so is both prudent and responsible.

Coronavirus does appear to be disproportionately affecting minority communities. Adams said as much on the “CBS This Morning” show on April 7. Virus “hot zones” are predominantly in urban areas such as New York City, New Orleans and Los Angeles which also have large minority communities. Adams also noted that many in the black community have preexisting conditions including asthma, diabetes and heart disease that can make surviving coronavirus more difficult.

But some in the media are trying to make the coronavirus a racial issue. An Axios headline read: “Coronavirus Hits Poor, Minority Communities Harder.” Among other things, Axios chose to cite “substandard housing” before it mentioned that many of these communities also have multi-generational living arrangements. And this is a major factor in how the virus spread in Italy – a predominantly white country.

And the Washington Post began an editorial talking about racial factors and the coronavirus with the odd line “The novel coronavirus, as far as we know, does not discriminate along racial lines.” That line of thinking suggests that perhaps the last season of the television show “Designated Survivor,” in which a fictional president fought an engineered pandemic designed to sterilize black people and render them extinct, might actually be a possibility.

Now is not to time to try to make something out of nothing. This health issue is real.

Black communities are at risk based on things like density of location. The surgeon general’s advice is meant to save black and brown lives. As a community, we have been historically hit the hardest with the spread of diseases such as HIV. Taking precautionary measures such as those advised by the surgeon general will only help to protect and strengthen our communities.

I want to close by saying while your state and local health departments and those of us in public service are working day and night to help stop the spread of COVID-19 and to protect you regardless of your color, your creed or your geography, I need you to know that you’re not helpless and that it’s even more important in communities of color, we adhere to the task force guidelines to slow the spread…

Avoid alcohol, tobacco, and drugs. And call your friends and family. Check on your mother, she wants to hear from you right now.

Americans need to adhere to the advice of our nation’s surgeon general, Dr. Jerome Adams, during this pandemic. Many people fit the medical profiles that cause this virus to flourish and spread. Others are at risk because of their vulnerable age group.

If we all listen up and practice good social distancing measures, along with his advice and common sense, we would be contributing a lot to turn this epidemic around and provide a safe environment for everyone.

Alcindor asked Adams: “Do you, I guess, have a response to people who might be offended by the language that you used?”

He did. Adams said that, recognizing the disparate threat, he was working with groups such as the NAACP on “targeted outreach” to the black community. As to how he said it, Adams explained:

I have a Puerto Rican brother-in-law. I call my Grand Daddy “Grand Daddy.” I have relatives who call their grandparents “Big Mama.”

So that was not meant to be offensive, that is the language that we use and that I use and we need to continue to target our outreach to those communities. It is critically important that they understand that it’s not just about them and I was very clear about that. It’s not just about what you do, but you also are not helpless…

We need everyone – black, brown, white, whatever color you are – to follow the president’s guidelines, the coronavirus guidelines and do their part because when I talked to the NAACP three weeks ago, it’s important to note that one of the things that they asked me was will you help dispel the myths in this community that people actually can’t get coronavirus if they’re black. That was a myth that was out there that’s actually very important for us to squash here.

Immediately after Adams rebutted Alcindor, he was backed up by Dr. Anthony Fauci, the director of the National Institute of Allergy and Infectious Diseases. Praising Adams’s comments, Fauci said:

Jerome, you did it beautifully. You can’t do it any better than that. I know Jerome personally. I can just testify that he made no — not even a hint of being offensive at all with that comment.

Project 21 member Nadra Enzi also noted that the appeal by Adams for people to reduce or eliminate use of alcohol, tobacco and illicit drugs – something he clarified was directed at all Americans – has not always been criticized when directed solely at blacks by others:

When Elijah Muhammad and Dick Gregory, among others, called on black people to change their diets, no one said it was anti-black.

And as for the possibility that Adams was singling out the black community about drugs, alcohol and tobacco, there’s a personal issue in it for him. His brother is currently incarcerated for crimes related to his drug abuse.