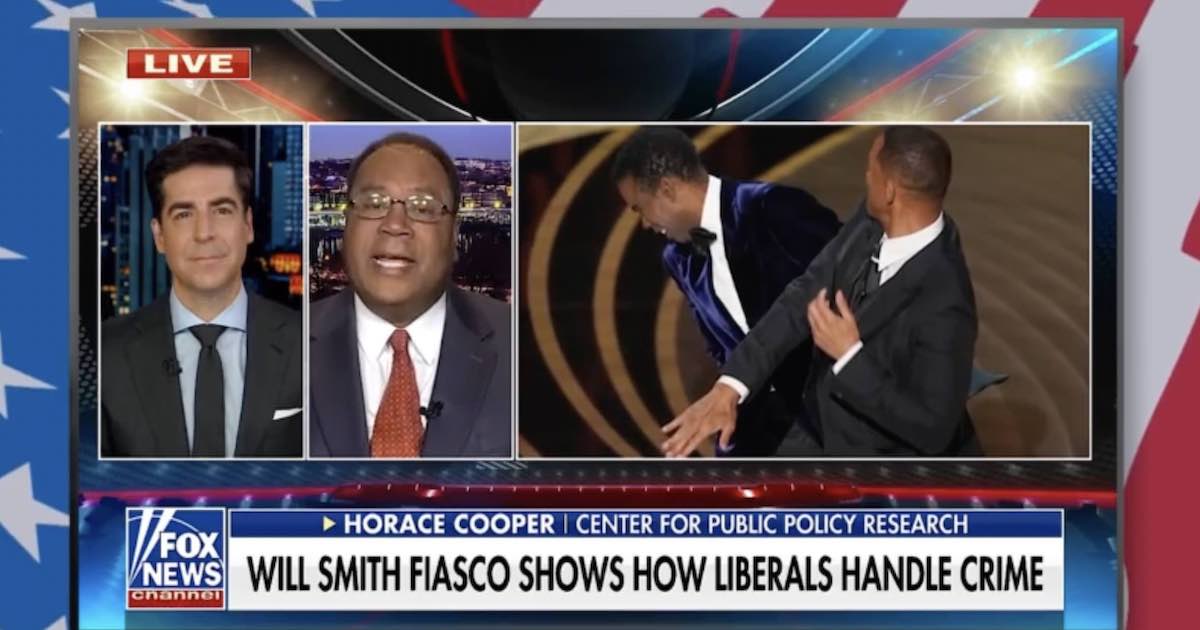 Project 21 Co-Chairman Horace Cooper has often pointed out: “If it wasn’t for double-standards, the left would have no standards at all.”

And now the left appears to be embracing a standard perfectly befitting its mindset. Let it henceforth be called the “Will Smith Standard.”

In essence, the Will Smith Standard erodes the normal standards of respect and decency, creating a dangerous world without consequences where anything goes – at least, for the elites and their favored minions.

Appearing on “Jesse Watters Primetime” on the Fox News Channel to discuss the societal ramifications of the infamous angry slapping of comedian Chris Rock by actor Will Smith at the Oscars, Watters asked: “Whatever happened to ‘violence is never the answer’?” He acknowledged a disconnect in how the privileged and regular people are treated:

A concerned parent gets tackled and arrested for speaking out on an attack against his own daughter, but Will Smith slaps someone across the face and gets praised. Got it!

We’re living in two different Americas. If you’re a celebrity, you get away with anything while normal people have to suffer their consequences.

Noting how “the little guy” gets “shut down” when he protests, being told to “shut up” and “deal with it,” Horace explained how the Will Smith Standard sets up a difference for those holding power:

We’re now seeing a standard, that was being established by Will Smith, that we will rue.

You see, this happened in this very, very elite place. But when people watch and see that there are no consequences – not even the ability to just say “next time, next year, you have forfeited the right to be able to introduce or stand on the platform of any kind,” they can’t even do that –we’re going to start seeing people do this in other settings.

That’s what you get when you don’t have standards that apply to everyone.

Noting that other comedians are now concerned for their safety behind the microphone, Watters asked Horace if the inherent threat of the Will Smith Standard is “more significant than people realize.”

What about if you’re giving a lecture at a university and someone doesn’t like it? What if someone at a presidential press conference decides they’re not happy with what’s happened?

We’re creating this action where actually, instead of immediately expelling him, instead of doing that, [Smith] was lauded, he was praised. He was allowed to be recognized in front of everyone. And now,… there’s still no actual consequences.

And this led to Horace’s warning of “how this plays out”:

I remember when the pie was being thrown at people at random places whenever prominent people showed up. What happens when we go from pie to actual fists?”