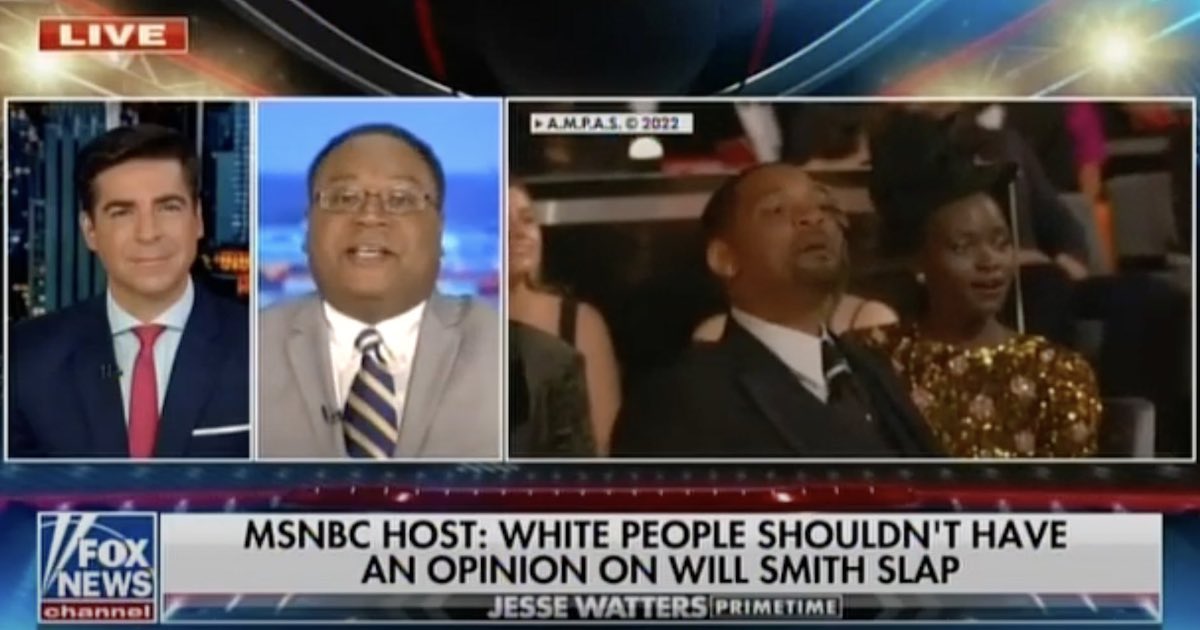 Just as America thought the obsession with Will Smith hitting Chris Rock at the Oscars had ended, MSNBC dragged everyone back into it. And now the leftist media wants to make this incident involving black men a white supremacy issue.

On “Jesse Watters Primetime” on the Fox News Channel, Project 21 Co-Chairman Horace Cooper said: “It’s just totally ridiculous. I can’t believe that race is supposed to cover up the behavior that you witness, regardless of who is involved.”

Over at MSNBC last weekend, host Tiffany Cross said white people are not entitled to have an opinion about the slap-fight that was brought into their homes in place of a movie awards ceremony. To oppose the violence, apparently, is projecting white values on black culture.

In her effort to “try to put this in context for our white fellow countrymen as best I can,” Cross explained there is a “commonality” among black people that whites can’t comprehend. To prove it, she used this analogy:

[I]f we went to a white person’s home, and it was their family dinner, and we were sitting at the table, and the mother hauled off and slapped the father. And everybody at the table has an opinion.

You know, the sister is like, “Mom, you always do this.” And the brother is like, “I can’t believe you’re doing this.” And Dad is like, “You’re terrible.” If I weigh in as the guest in this home and I say, “Yeah, you guys are terrible.” Everybody’s like, “I’m sorry. When did you get an opinion? This is our family table.”

“That’s what this moment felt like for many of us,” Cross lectured. “There’s a nuance to what happened.” MSNBC panelist Yvette Nicole Brown added: “Some people use their words, some people use their hands. It is what it is. In the black community, we understand that.”

Fox News host Jesse Watters, astounded by this, wondered: “What else are we not allowed to have an opinion about?” Horace responded:

I’m really kind of curious. If we’d been at a dinner like she described, and the mother hauled out… and hit the 3rd grader, are you supposed to sit there idly by and say… “oh well, this is none of my business?”

It is remarkable that, today, we’re going to look at people – if we follow Ms. Cross’s model – solely on the basis of their race.

Watters called the dinner party moralizing a “stupid analogy” since the Smith-Rock confrontation was broadcast worldwide. Horace “absolutely” agreed with this, and pointed out:

[L]ike the segregationists of the past, we are hearing people say “just judge it on the basis of race – there’s no reason for you to use your own judgment [when you can] use your own opinion.”

Remarking about how wrong this behavior is, Horace said:

Watters reported that MSNBC anchors – many of them white and liberal – spent the last week reporting on the slap, and “I don’t think she confronted any of them in the hallways.”