Posted at 05:30h in Environment and Enterprise Institute, Global Warming by The National Center

This was the biggest bust in the history of the Capital Weather Gang. 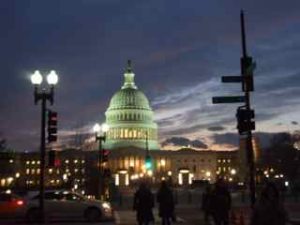 He’s right.  All DC got was a bit of rain.  But, based on the faulty prediction, the government and all the schools closed.  The Metro system lost money servicing 65,000 people, one quarter of its normal weekday ridership.  Businesses lost billions in revenue and productivity.

These losses were all based on a prediction that more snow would fall on DC than it could handle, up to 10 inches.  Yes, that’s inches, not feet.

The major mistake was to accept computer models that said the amount of moisture in the storm would make up for the warmth of the air below.

Citing the predicted snowstorm that was not to be, the House Science, Space and Technology Committee cancelled a hearing on “Policy Relevant Climate Issues in Context.”

The hearing featured speakers on the state of the science for predicting changes in climate over decades, all based on – you guessed it – computer models.