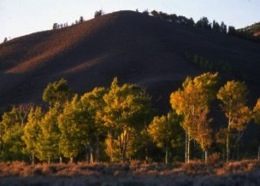 I wrote yesterday of the left-wing special interest group Think Progress’ rather silly belief that in owning 28 percent of the nation’s land area, the federal government owns exactly the right amount of land (or possibly not enough?) and that if the feds owned any less, dangerous harm to America’s heritage would result.

Today I point out the ignorance of Think Progress in believing:

By seizing public lands [from the federal government], special interests are* infringing upon a uniquely American idea: that there are places held in trust for all Americans – present and future – to hike, fish, camp, hunt, and enjoy.

And also in believing federal land ownership is synonymous with access to said lands by the public, by writing, “Public lands are a place for all Americans.”

Approximately one-third of U.S. Forest Service System lands, equalling 58.5 million acres, are “roadless.” That’s a land area larger than Great Britain, and it means as it sounds: if you want to enjoy them, or fish and camp on them as Think Progress suggests is their purpose, you’ll have to walk.

Some further 4 million acres of federal lands in the Rocky Mountains are similarly inaccessible. They are either totally surrounded by private land or no roads exist on which they can be accessed.

78 countries are smaller than that.

Who loses fishing and camping access to these lands if they are sold?

Hikers. Really energetic hikers. They are the only ones who can get in.

If the feds don’t own the lands, people can have access to them no matter what hijinks are going on in Washington.

*It is unclear who exactly Think Progress believes is presently seizing public lands. The only land seizure I know of recently is in Ukraine.