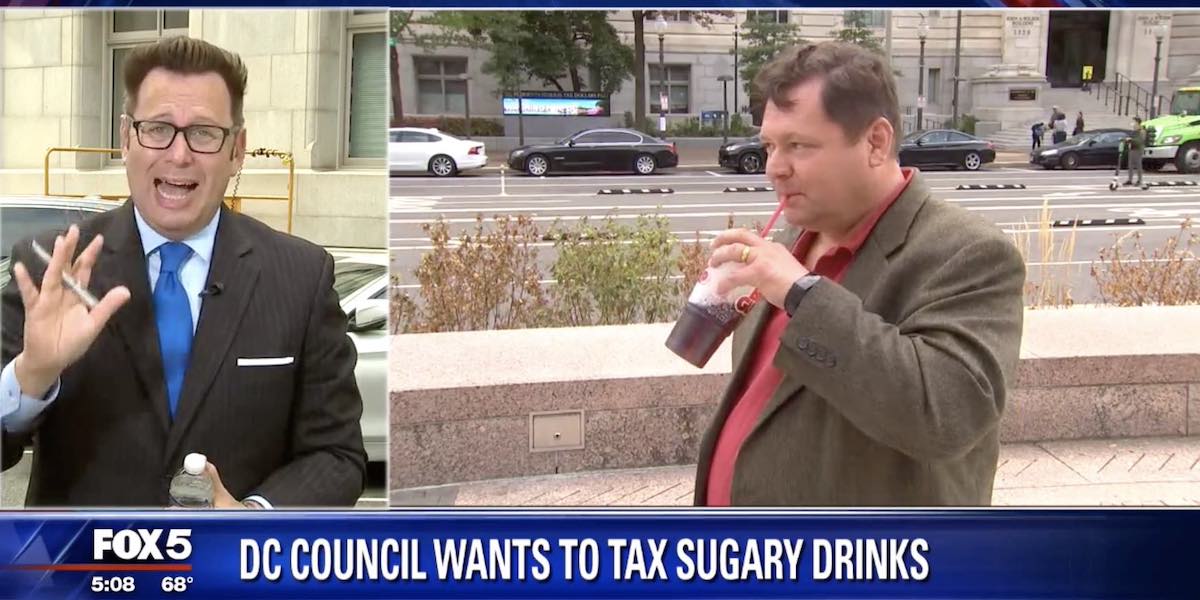 Just seven days after Washington, D.C. raised the sales tax on sodas and other sugary drinks by two percent, legislation was introduced to repeal the tax. Unfortunately, it was not because the City Council was already having understandable second thoughts.

Not even close. The repeal is intended to make way for a new 1.5-cent per ounce excise tax on the same products. Councilmember Brianne K. Nadeau wants to tax distributors of sodas, sports drinks, iced coffee and other drinks so that they will pass on the cost to consumers through higher menu and shelf prices. Under this strategy, the sticker shock could lead to people choosing other beverages.

A two-liter bottle of regular cola could end up costing a dollar!

But the proposed tax – which is supposed to influence people to choose something other than the taxed products – is also supposed to fund childcare programs, health food giveaways and open space beautification.

So what is the Council’s true desired result: more money or healthier citizens?

National Center Vice President David W. Almasi, in an interview with WTTG-TV, called the soda tax a “cash grab” by politicians at the expense of the city residents least able to afford it.

In an interview with reporter Tom Fitzgerald, David said:

In other places where soda taxes have been hiked, it has been found that it’s those who typically consume in moderation who are the most likely to follow Nadeau’s plan. The occasional drinker shies away from the higher costs, while the “addict” shells out the extra cash. And the government ends up happy that these people are taking the financial hit and continuing to choose unhealthier options, because the government has already budgeted the tax revenue.

Especially with a city like Washington, there are many ways for a soda tax to fail. For example, the WTTG-TV studios are located in far Northwest DC – less than half a mile from a grocery store right across the border in Maryland, where there are no soda taxes. It’d be easy for Fitzgerald and his colleagues to stock studio refrigerators with cheaper products purchased in the “Free State.” While the excise tax is supposed to promote better nutrition, cross-border purchasing associated with the Philadelphia soda tax actually exacerbated the alleged “food desert” problem in one neighborhood as well as cost jobs when a supermarket was forced to close due to a soda tax-related decline in sales.

In its “Blueprint for a Better Deal for Black America,” the National Center’s Project 21 black leadership network recommended a repeal of soda taxes. These regressive taxes were criticized for “hurt[ing] blacks disproportionately because they require the poor to pay a higher portion of their income on taxes” and “are less about promoting public health than about generating government revenue.”

The National Center’s Free Enterprise Project, in a Detroit News commentary, also exposed the meddling of the liberal Laura and John Arnold Foundation and its affiliated groups in promoting and protecting the Philadelphia soda tax.

The situation may be bleak for the nation’s capital. On the day the excise tax bill was filed, it already had the support of nine of the 13 members of the D.C. City Council. While the Home Rule Act that governs Washington allows Congress to override city legislation, it is unlikely that Speaker Nancy Pelosi or Chairman Elijah Cummings have any interest in vetoing a soda tax.