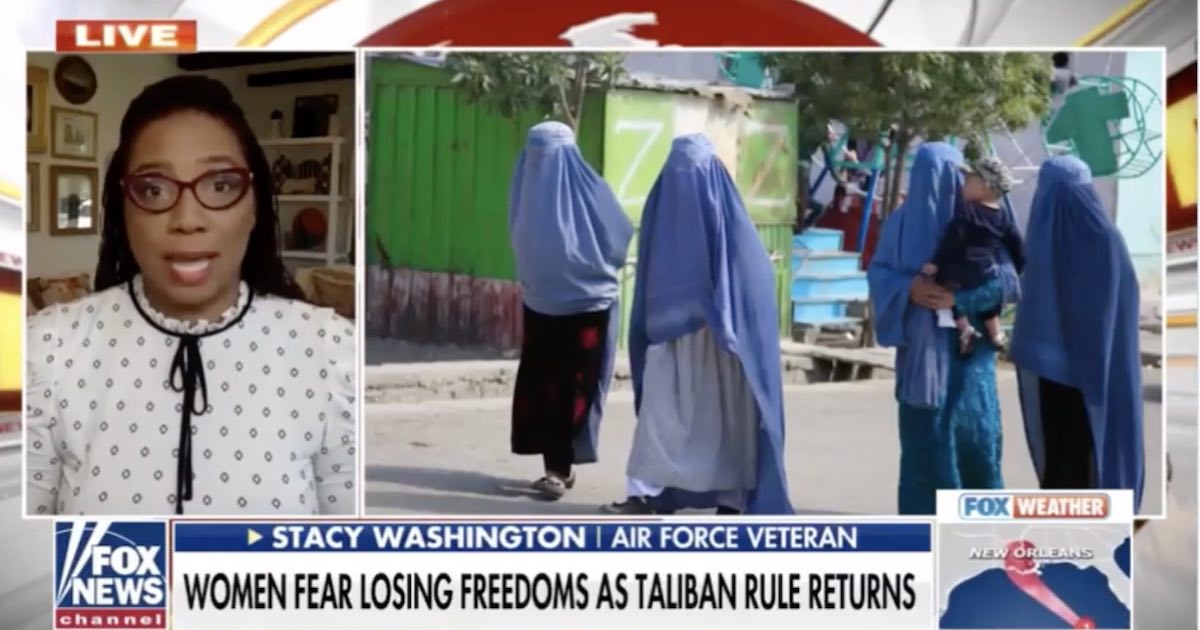 Among the many changes coming to Afghanistan with the Taliban’s takeover, one of the most grievous is the return of Sharia law and the particular effect it will have on Afghani women.

Project 21 Co-Chairman Stacy Washington said the reimplementation of Sharia law will lead to an “erasure of women.” On the Fox News Channel’s “Fox and Friends” program, she told co-host Will Cain that women there “will be rolled back into a slave status.”

“If you look back to the last time the Taliban had influence there in Afghanistan,” Stacy said, “they executed strict Sharia law.” And Taliban spokesman Zabihulla Mujahid has already publicly warned women “to stay home until the situation gets normal” – warning that some Taliban members “very well may mistreat women.”

A pregnant American woman already reported, for instance, that she was kicked in the stomach by a Taliban fighter before she went into hiding. In public places, images of women are being painted over, and women are being specifically targeted for abuse and murder.

On a panel with other female veterans of the American military, Stacy contrasted the way women were recently treated with the way they can expect to be treated now that the Taliban has returned:

Women who are currently working alongside men, serving in government… working as aircraft mechanics – these women are doing amazing things, just like American women – they will be rolled back into a slave status.

They will not be allowed to speak in public. Their face has to be covered from head-to-toe… They can’t show their feet, wrists, ankles, hands or their eyes. They have to have a mesh covering over the little slit in the burqa that allows them to see.

They can’t be seen on their balconies. They can’t walk around in their own front yards – because no man unrelated to you is allowed to look upon you. They can’t be represented in print or magazines or television or movies.

And for girls who grew up in Afghanistan after American forces removed the Taliban from power almost 20 years ago – before President Joe Biden’s abrupt pullout allowed their swift return to power – the change there will undoubtedly be shocking:

I’m talking about little girls who are currently running around with their faces out, playing in shorts and t-shirts. All of them will have to be covered in burqas. And the Taliban are already going door-to-door and taking girls as young as 12 for “wives.”

“We’re talking about the complete erasure of rights for women in Afghanistan,” Stacy reiterated, “and it’s such a shame.”