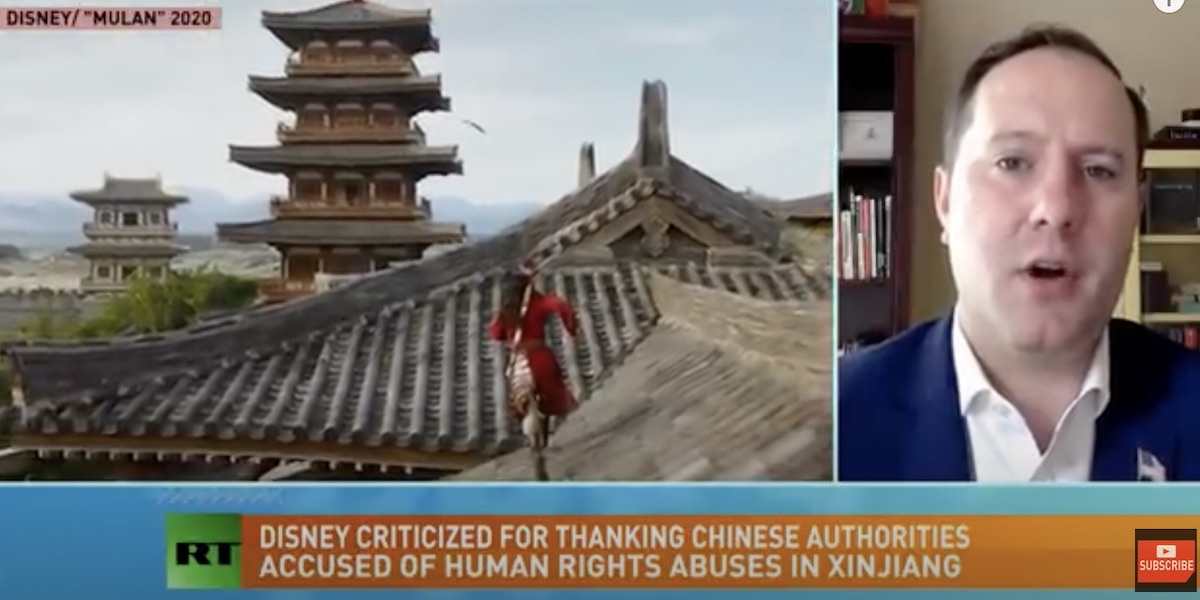 When it comes to Disney turning a “blind eye” to human rights abuses in China, the director of the National Center’s Free Enterprise Project (FEP) said “they’ll be hearing from me.”

In what RT America host Steve Malzberg called “one of the most egregious examples of capitulation to China,” the Walt Disney Company has refused to call out the abuses of the communist dictatorship abroad despite the company using its political capital domestically to support the Black Lives Matter movement and to promote unregulated abortion.

On Malzberg’s “Eat the Press” program on the RT America network, Justin Danhof, Esq. criticized the massive entertainment company for filming portions of its live-action “Mulan” movie in an area plagued by allegations of horrific human rights abuses against a religious minority perpetrated by the ruling Chinese Community Party. Justin explained:

It was shot in the Xinjiang province [of Communist China]. And what’s problematic is that is where the Chinese Community Party has forced labor camps of a minority Muslim population known as the Uighurs. So Disney moralizes and proselytizes us in the United States of America over this [allegation of] “systemic racism” and supports Black Lives Matter while they’re burning our cities down, yet they turn a blind eye to actual slave labor!

And it’s worse than that, Steve. It is worse than that. There is forced rape involved here. So what they’re doing is they’re trying to cut off the bloodline of this Uighur minority population through forced rape of their women. Think about how horrific that is.

And not only did Disney film in the province some of the movie “Mulan.” In the credits of the film, they thanked the communists’ four different propaganda outfits of the Chinese Community Party.

Justin told an incredulous Malzberg that this is “unsurprising” considering that corporate America – including American businesses such as Nike and the National Basketball Association (NBA) – “bends its knees” to China because these companies have “made money” in China and this windfall of cash has “bought their silence” when it comes to charges of abuse.

Discussing corporate reluctance – particularly Disney’s – to call out the Chinese regime, Justin pointed out the double-standard when it comes to criticizing things back home:

They support Marxism in America, but they don’t say a peep about actual human rights violations that are occurring right in front of their eyes where they’re filming a movie.

And, if you get your moral authority from Disney or from Nike of the NBA – check your moral compass. FEP has been a frequent thorn in the side of the Walt Disney Company, asking tough questions of its CEOs over more than a decade of shareholder activism. When Malzberg asked Justin if this might be an issue to bring up at the company’s 2021 shareholder meeting, Justin replied:

We are 100-percent going to engage Bob Chapek – the CEO of Disney – on this issue and others.

Because, look, it’s a hypocrisy issue. And, again, at the end of the day, this could be a financial drain on Disney. When more folks start to realize what Disney is engaged in – turning a blind eye to the genocide of a minority Muslim population in China – I think that folks might get a little put off by that, the more that they’re made aware of one of the actions of Disney.

And, as an investor, that would hurt me. So I think that all investors should speak out on the issue.

In an interview with the Daily Caller, Justin called Disney’s behavior of “normalizing genocide” in China “wildly offensive.” He said: “There can be no doubt that Disney has to be aware of this.” He even suggested that Disney workers “probably even saw some of the centers housing the Uigurs.”